Better Call Saul wrapped up its amazing first season with “Marco,” an episode packed with details, comedy, and Easter Eggs from its parent show.

The Bingo calling scene: We finally get an explanation of a Chicago Sunroof! And so does the retirement home in Albuquerque. Which just added to the pure comedy gold of this scene. It was far and way my favorite scene of the episode. Jimmy’s “lawyer” reasoning of why Chet, the guy with the BMW, was in the wrong for Jimmy defecating in his car was pure genius; it was a real show of how Jimmy can talk his way out of anything and part of why he is so likable. I also loved how all the “B” balls being called was what brought Jimmy to his breaking point to even tell the story in the first place. Not to mention, this scene had some of the best dialogue including:

The explanation of why Jimmy came to ABQ: The entire cold open was pretty brilliant. The short scene with Jimmy fresh out of jail and going to tell Marco he is leaving was a good way to let us know that it was the jail stint for the Chicago Sunroof that sent him to Albuquerque. The exchange between Marco tells us exactly what will happen during the episode; Jimmy and Marco will pull off one last big con and Marco will spend the rest of his life on the bar stool. It mirrors the same set up of the entire series – we know how Jimmy’s life will end up because we have already been told. In this case, it is the journey that is more important.

All the showing: Knowing why Jimmy chose to not take the deal with Davis and Mane is not directly said to us. And I love that. There is a lot of story telling going on in this episode. Jimmy may be a “criminal” with Marco, pulling cons on people, but Marco gives Jimmy a feeling of self-worth. He may be a criminal, but he is a great one. In Albuquerque, he feels tries to be a lawyer, even doing the right thing, but he is always in the shadow of Chuck, who does nothing but put down Jimmy’s self worth. None of this is done with looking at the camera and telling us what is happening. It is done with carefully written dialogue and progression.

Howard is the good guy: I had a sneaking suspicion all along that Howard wasn’t the bad guy in the situation. If we are going with the color theory, the man only wears blue, indication that he isn’t all bad. Plus, Jimmy apologized for the whole pig-fucker thing, so that was worth the scene alone. But in addition, Howard seems to give Jimmy some validation for all the work he has done for Chuck the last year when he sees the shopping list.

How much “Marco” mirrored “Uno”: A lot of scenes came full circle here. They may be small, but we see the reappearance of the trashcan Jimmy kicked in at the beginning of the series. At the time he was upset that HHM wouldn’t release Chuck out of his contract. Now we see it after Jimmy realizes that Chuck has a lot more control over the firm than he originally thought and that Chuck is actually the asshole. We also see Jimmy pull out of the court parking lot like a bat-out-of-hell, this time though he has a friend in Mike instead of an angry parking attendant relationship.

The detail of the half-dollar con: I absolutely love how much detail went into the con of selling the Kennedy half-dollar that is facing the wrong way. Bob Odenkirk’s delivery and Mel Rodriguez’ reactions were so spot on. If you skip on down to the “tid-bits” section, you can read more of my theory on this scene.

Chuck is an ass to everyone: Howard gets Ernie, another mailroom employee to take care of Chuck. The delivery of the word “almost” was enough to show what kind of a person Chuck really is. It makes me wonder why he is so valued at HHM if he treats people this way.

Pride and Greed: Common themes in Breaking Bad, Jimmy is falling to the same thing Walt did. He may be doing it in a less murder-y way, but they are the same sins. Marco suggests that Jimmy isn’t a great lawyer because he isn’t making money. Jimmy gets the deal of lifetime, thanks to Kim and Howard, to fast track to partner at a firm in Santa Fe. Then he decides to not do it because he would still be living in Chuck’s shadow. There is no doubt that Jimmy would have made a lot of money there. But the fact that he and Mike could have made off with 800,000 dollars each is too much to bear. The thing that Mike has that Jimmy doesn’t is conviction and a moral code. Mike has never fallen to pride or greed (in the time we have known him). He has a job, and he does it. Jimmy could do the same, but we know he doesn’t.

The Con Montage: It’s not that I didn’t get enjoyment out of the different cons Marco and Jimmy were pulling off; it was that it seemed really long. It was almost as if there wasn’t enough material from the rest of the episode, and there needed to be some fun filler. It was fun, but at this point, I understood the passage of time in Cicero and that Jimmy and Marco are really good at pulling cons.

Jimmy would have come to the same conclusion either way: I don’t think Jimmy needed to go back to Cicero to “find himself.” Ultimately, he chose the easy path because of how Chuck treated him, not because of how Marco inspired him. At least I think. I feel that the real breaking point of Jimmy was finding out what Chuck really thought of him, not a week of playing hooky. 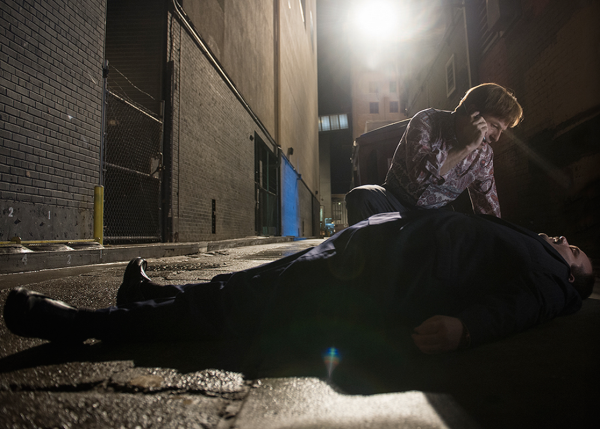 Belize: When Jimmy is calling bingo, he mentions that B is for Belize, and he will never get to go there. He may be sad about that now, but if you watched Breaking Bad, you know that Belize means you’ve gone away to die.

White Caddy in the desert: Marco thinks that just because Jimmy is a lawyer, he is probably driving a white Cadillac. Although he doesn’t have that sweet ride now, it is the car he ends up having when we meet him as Saul in Breaking Bad.

The Pinky Ring: We finally know how Jimmy/Saul gets his pinky ring he always wears; Marco’s mother gave it to Jimmy after Marco passed away. This could also be similar to Walt’s way of picking up objects and habits of those close to him who die.

Wahhhh: That I will be a sad gal for the next year and over analyze every detail of the first season while I wait for the second.

The Credits: The opening credit shows Saul’s “World’s Best Lawyer” coffee mug crashing and breaking on his office floor from Breaking Bad. Is this a direct message that Jimmy is breaking from the good guy image lawyer image and he is about to be Saul? I think so.

Chet and Jimmy’s first wife: This isn’t the first time we have heard about one of Jimmy’s wives. This episode, we find out that Chet, the receiver of the Chicago Sunroof, got such a present because he was sleeping with Jimmy’s first wife. In Breaking Bad we know that Jimmy’s stepdad slept with his second wife. He doesn’t have much luck with wives. I just hope that Kim isn’t one of those wives; she doesn’t seem like the cheating type.

Marco’s cough: A habitual cough is never a good thing in the BrBa universe. It was clear from the beginning of hearing Marco’s cough that he wouldn’t be long for the show.

Kevin Costner: I love that not only was Jimmy able to fool a woman into thinking he was Kevin Costner to get her in bed, but that once she found out, he started quoting Field of Dreams.

Holy Moly, if this one is true: MIND BLOWN: I have mentioned that this episode does a lot of mirroring of “Uno.” Jimmy represents three teenagers who do a terrible, terrible thing. In court, Jimmy starts his argument with “Oh, to be 19 again!” In “Marco,” when Jimmy is calling bingo numbers, he says “O 64 as in Oh to be 64 again!” So what does 1964 have to do with anything? 1964 is the year the Kennedy half-dollar was released. Boom! Now your mind is blown, too.

Want some more mind-blowing stuff? First of all, the Kennedy dollar has always faced west. That is the scam. But Jimmy goes into detail about how presidents face east on coins to symbolize the dawn. He also mentioned that graves face east for the same reason. Toward the end of the episode, Jimmy is walking to the courthouse for his big meeting and there is a shot of just his head facing east. Is this the way to show that Jimmy is honoring the dead (Marco), and then makes his decision to do things his way from now on? I think it could be!

Music from the Episode:

The song that both Marco and Jimmy whistle is “Smoke on the Water” by Deep Purple.

Hush Comics gives “Marco” a B+ for being chock full of detail, some of the best lines of the series, but for outcome being the case whether the trip to Cicero happened or not.