I’m pretty sure that, “The 80s and the 90s consistently made the best movies, especially, but not limited to, family movies, and if you disagree shut up because you’re wrong,” is a statement of science. It goes: 1. Newton’s laws of gravitation; 2. The laws of thermodynamics; 3. General relativity; 4. If you don’t like 80s and 90s movies, shut up because you’re dumb and have no friends.  I don’t even know if I could count all the movies I’ve done on this list so far (and that are yet to come) that come from the roughly ’79-’94 range that are amazing.

It’s something about the time period: digital effects were non-existent or so primitive that the film’s practical effects had to be on their A game, and if digital was involved at all, its presence was very limited and there to patch up the cosmetics; the story writing hadn’t yet become jaded and people were still trying to evoke genuine emotional reactions through AAA movies. Plus, there is an unboundedness to those movies as studios haven’t yet come upon the idea that there were magic ideas that would make millions of dollars appear. Because very few rules had yet to be established, they were more inclined to take on risky and unknown projects.

And what made family movies of this time period so meaningful and endearing is that they actually respected kids. It’s hard to place exactly, but kids were frequently extending beyond their reach going places adults were too afraid, jaded, or dumb to go themselves. They constantly put themselves in danger — real danger — that might mean even their death. 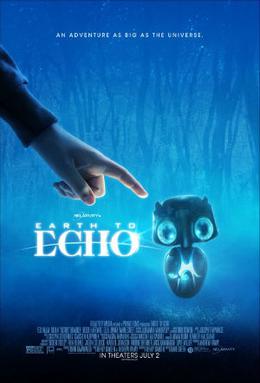 So when I saw Earth to Echo, the thing I was least prepared for was how earnest its story is. Yes, on one level it’s the story of three friends who find an alien on their last night together in the same town, but really it reflects what it’s like growing up: how unfair it is to have powers bigger than yourself impinge on your freedom forcing you to do things that, even in your admitted ignorance, you sense as short sighted and unnecessary. It reflects the heightened importance EVERYTHING carries because it’s the first time it’s happened to you, and you don’t know if it will happen again. And kids are crappy sometimes. It neither deifies nor villainizes them. They can be self-sacrificing (like when Munch is taken by a strange adult), but they can also be cowards (like when Tuck refuses to help save Alex from an arcade’s security guard). I admit to tearing up at least once.

On a technical level the movie shines. A few scenes feature CG that looks a little squishy, but there were times when I wasn’t sure if it was a CG alien on the desk, or a puppet. And it’s a “found footage” movie, which is usually the kiss of garbage, but it was utilized in a way to actually further the story and inflate the world rather than as an excuse for terrible camera work.

The best part, though, is how the movie shows your life can instantly become elevated above the lives of those around you if you’re willing and open for the right moment. In a world in which adults were willing to believe appearances and do as told, a group of kids were receptive to a moment of transcendence and change the course of lives and (inferrably) history. But that acts as footnote to the fact that this moment of transcendence allows the four friends to overcome their enforced isolation from each other. And it’s so touching.

From what I can tell, the movie didn’t get much traction: it didn’t cost much to make, but 3 times not much is still a third the budget of Avatar. It’s a little disheartening to see the only kid’s movie not made out of hot steaming garbage (since Harry Potter) pass by unnoticed. It’s on Netflix, and worth your time.

All images belong to Relativity Media.