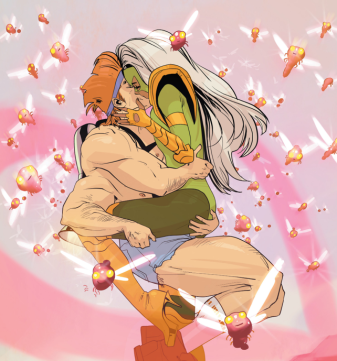 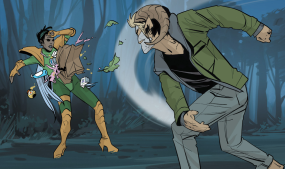 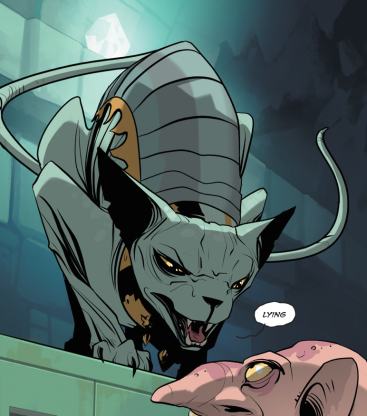 Saga is the best comic book series I’ve ever read.  Point blank. Hands down.  No debate.  Brian K. Vaughn and Fiona Staples firmly have my heart in their grasp.  These two brilliantly talented individuals have crafted such an incredibly enchanting, detailed and (most critically) original universe.  The characters are relatable and dynamic – a pretty impressive feat considering the cast is composed entirely of odd alien life forms.  The surroundings and environments are beautiful.  The plot is layered and interesting at every level.  I even love how awkward this team can make me feel!!  Panels of the Fard and Stalk-sex belong in the comic book hall of fame.  In a time of sequels, remakes, and based-on works it’s a breath of fresh air – more like a tank of oxygen at the peak of Mt. Everest – to have Vaughn and Staples teamed up.  These two are unequivocally the most creative comic book duo out there.  Now if only they could get on a regular release schedule! – Taylor

These two creators have worked on over 100 issues of The Walking Dead together for over ten years. They are the Simon and Garfunkel of comic books, and they have one of the best relationships of any book out. Their creative direction syncs so well; minimal exposition means that the story is told through images often-times better than it is through words. It’s been a long journey, and one that does look to be slowing down anytime soon. – Sherif

Every month, when I read Batman, I feel so small compared to these geniuses.  They are the real deal, people.  After 37 issues into their book, they know how the other one works to a tee.  Snyder’s storytelling is compelling. Capullo’s art is top notch.  Together, their story is the best in the biz.  Each of them work incredibly hard to get out the quality of book they have, and one without the other would disrupt the whole process.  Gah!  I could gush over these two all day! – Adrian

A lot of people tend to think the TMNT carry themselves and that it is easy to pull them off. With Waltz and Santolouco, however, their own take on the turtles includes additions from just about every incarnation of the turtles, appeasing all generations of fans. It’s not all just a jam-packed love story, though; the consistency of good story-telling has increased my love for TMNT so much more than is was – which was borderline insane in the first place. I find that even though I have enjoyed the issues in the TMNT series not written and drawn by Waltz and Santolouco to be fun and just as engaging at time these two have almost become the staple of this series for this year and have created some of the best stories for these characters I have ever seen, plus I have a soft spot for Herman the Hermit crab which debuted a couple issue ago, whom was designed by Santolouco. – Jacob

Chew is a juggernaut of awesome. Layman and Guillory have put together what is by far one of the most comical series ever created. We find this year that a bit of toe can go a long way. Layman proves his writing chops by not only having one of the most popular creator owned books on the market has recently been seen writing one of the most popular characters of all time, Batman. On top of doing Godzilla, paring up with a major motion picture release, I think we can all recognize John Layman as one of comics current top writers. Rob Guillory has one of the most definitive art styles of any artist currently working. The exaggerated character styles and even the little easter eggs he works into every panel make Chew more visually appealing than the majority of books currently on the market. Combined they become something on the power level of Captain Planet, BUT THERE’S ONLY TWO OF THEM! – Scott