With the recent release of the third installment of The Hunger Games franchise “Mockingjay Part I”, audiences are flocking to theatres to see brutal fight scenes and heartbreaking struggle on the big screen. The Hunger Games franchise is phenomenally successful, although this year’s film didn’t bring as much money in as anticipated ($123 million. How that’s a disappointment, I’m still not sure.) Millions of fans around the world were excited to see the newest film, dressing up as Katniss and other characters. My college even had a Hunger Games costume contest during dinner (ironically) to celebrate the release. And yet, for many viewers, the story’s themes hit a little too close to home.

Economic inequality is rampant in our world. People live paycheck to paycheck. They survive on food stamps that often fail to buy essential items. This Christmas, there will be many families who will have nothing to put under their tree. Graduates struggle to pay off student debt every day. And what may be worse of all, is if you are born in poverty, you’re likely to stay there, much like the citizens of Panem. There is no transferring from district to district. If you live in District Twelve, you will work in District Twelve, you will starve in District Twelve, and you will die in either District Twelve or the Arena. Meanwhile citizens of the Capital live comfortably. Our world, unfortunately, works on a similar system. Those who are born into poor families, are likely to stay poor. Those who are born into financially stable families, aren’t likely to find themselves in economic struggle. While we don’t have a President Snow or a Hunger Games, per se, but 98% of our citizens still live very much like those of Panem while the Capital lives abundantly because of the misfortune of the lower class.

There are little to no government aid programs in Panem. Katniss’ father dies in a mining accident and the family loses a large part of their income. Were there a worker’s union in Panem, this never would have happened. And had it not happened, Katniss’ mother wouldn’t have gone into a deep depression and with no access to mental health care, been unable to work, further cutting the family’s income. Due to neither of her parents able to bring in income, Katniss had to take care of the family herself. This left the family to starve because the Capital provides no food stamps. Not only that, but the justice system is corrupt and feeds on the racial division in the Districts. And all of this is because of the Capital, which controls all twelve districts, and shares none of the wealth.

Seem like fiction? If only. Only 6% of Americans have union protection in the workplace and have met the same fate as Katniss’ father. Millions of Americans can’t afford desperately needed mental health care and lose their jobs like Katniss’ mother. One in six Americans go hungry, and food stamp benefits were slashed in the last year. African-Americans are six times more likely to be incarcerated than white citizens. 2% of the country still controls the majority of the wealth. The Hunger Games may seem like just a franchise, but there is a lot more going on here than just a simple book.

It’s not just our government that’s causing economic inequality. Companies such as McDonald’s and Walmart pay their employees so low that most workers can’t afford to feed their families without a second job or reliance on food stamps.

Walmart pays its associates less than $25,000 a year. That isn’t enough to cover the basics for worker’s kids, let alone pay their bills or support their families. Managers of Walmart are also known for manipulating work schedules so that employees have a hard time working full-time; therefore, these workers don’t receive benefits and usually receive insufficient paychecks that negatively affect families, budgets, and ultimately lives. What’s really upsetting is that Walmart brings in an annual $16 billion in profits and a recent Fortune article stated that Walmart could afford to give workers a 50% raise without hurting its stock prices. There’s no reason Walmart can’t afford to pay their workers better. Not to mention, many workers were unable to spend Thanksgiving with their families this year. 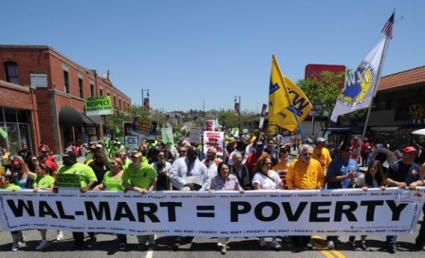 McDonald’s is even worse when it comes to economic inequality. McDonald’s employees make less than $11,000 a year. Managers at McDonalds are also known to manipulate schedules so that employees aren’t eligible for benefits and employees do not have the right to unionize, which keeps them from being able to bargain for better wages and working conditions. The CEO of McDonald’s, Donald Thompson made $9.5 million in 2013. It would take an average McDonald’s worker 864 years to make that.

These companies are just like the greedy Capitol of Panem. Just like the Capitol, they are cashing in on the cheap labor of its people and offering no workers compensation or benefits. Were these companies to raise their wages to $15 an hour (which they could afford to do) employees would experience a significant increase in the ability to take care of themselves and their families. Not only that, but a recent study by the U.S. House Committee on Education and the Workforce shows that Walmart pays its workers so low that most employees have to rely on food stamps and other Government programs. This cost taxpayers $900,000 at just one Walmart Supercenter in Wisconsin. They estimate that Walmart costs taxpayers roughly $8 million in subsidized food, living, and healthcare all because they won’t pay their workers enough to get by.

So what can we do about this? We can become the District 13 of our country. In “Mockingjay,” District 13 is an underground militia determined to unite the Districts of Panem and bring the Capitol to justice. They do this in several ways, but waging a full out violent war isn’t going to help our fight against economic inequality. A large part of District 13’s strategy for overthrowing the Capitol is educating the people of Panem of what President Snow was doing; taking the public eye away from the glittering jewels of reality television, fashion, and materialism and focusing it on the real issues. We as activists need to take economic inequality and put it out in the open. We need to show our country how pressing an issue this is. Education is our strongest ally in our fight against inequality.

The Harry Potter Alliance has been fighting for economic equality for over a year now and on Black Friday members visited Walmart and McDonald’s locations, passing out flyers to location managers about the way their workers are treated, informing them of the awful truth of what the companies they work for are doing. The HPA has also been using the hashtag #MyHungerGames and urging people to share their economic inequality stories with the world through everything from short tweets to long blog posts. By doing this, they are showing the real faces of economic inequality; the real faces of the Districts.

We need to take the public eye off of which guys are hottest in The Hunger Games franchise and reveal the bigger themes going on in the films and in our own country. Who cares if The Hunger Games have hot guys in them!? Suzanne Collins wasn’t thinking about hot guys when she wrote the series. Her concern was bringing these issues to light and inspiring people to do something about it. We can be the District 13 of our world. We need to raise our three finger salute to the skies and overthrow the Capitol of economic inequality.

I am a multimedia storyteller with experience in investigative journalism, beat reporting, social media management, and entertainment news. While I write on a variety of topics, my work tends to revolve around the city of Chicago, queer culture, fan activism, and marginalized voices. I am also a skilled copywriter, digital marketing specialist, and productivity coach. View all posts by Charli Renken