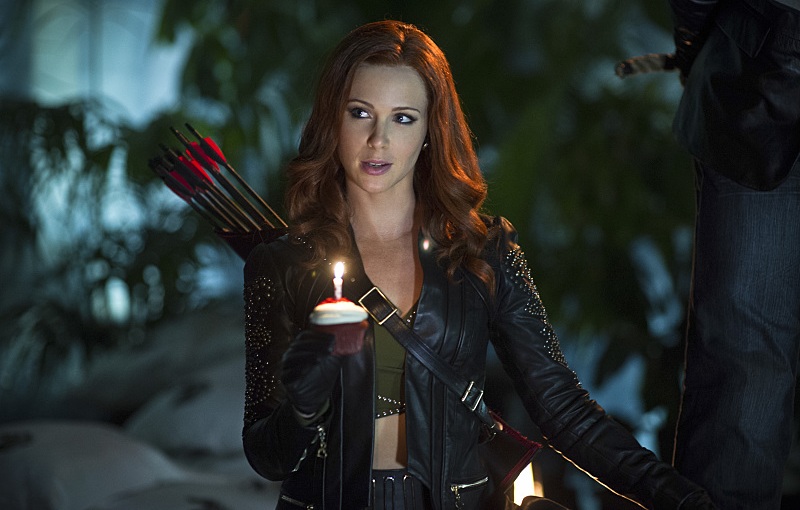 Last week’s episode of Arrow, Draw “Back Your Bow”, may not have looked too appealing, but was actually way more delightful than I expected. It had its faults, but overall it was a pretty fun watch. This week, Oliver finds himself up against yet another person in Starling City who uses a bow and arrow to kill people, but this time it’s a crazy lady who’s in love with him. Can I just say really quick, if every foe you face uses a bow and arrow, isn’t that kind of lame? It doesn’t really set him apart from anything if apparently Starling City is the capital of archery. Anyhow, while Oliver deals with his secret admirer, Felicity gets closer to Ray Palmer and a love triangle is born. Well actually it’s a love parallelogram if you count Barry Allen who is also pretty into Felicity. But then again, who isn’t?

“Draw Back Your Bow” begins in a flashback to six months ago on the night Starling City fell. The Arrow jumps out of his van to save a struggling adorable red head from one of the juiced up masked men. Her attacker falls, the Arrow takes off and the damsel in distress swoons while cuddling the arrow that saved her. Low and behold, in a very short six months time she transforms herself from a victim to a full-fledged martial artist, bomb expert and archer all to get attention and affection from the Arrow.

Carrie Cutter is kind of a random villain to bring in from the comics, and a very new one but I personally thought she was a lot of fun. I also thoroughly enjoyed that during all of her scenes there was basically slow circus music playing in the background just to emphasize that this bitch is crazy. I will not waste time trying to figure out how she gained the knowledge she seems to have now, because if she was a martial artist or any kind of the badass she is as Cupid then she probably wouldn’t have been so easily bested by her in the streets the night Arrow saved her.

I appreciate that the show at least addressed that she used to be a police officer, which explains some of the knowledge she has of weapons and fighting techniques, but the pieces still don’t quite fit if you want to spend time thinking about it.

While Oliver grapples with crazy Cupid he also has to deal with the heartbreak of watching the girl he loves but refuses to be with move on with her life. With the man who now owns his family’s company no less. Burn. I’m not crazy about the Oliver-Felicity will they/won’t they love story in the first place, but I guess Oliver has to have a love interest and why not the only redeeming female character on the show? While it hurts him to do it, Oliver stays committed to not being able to be with anyone as long as he is the Arrow and he gives a moving little speech to Cupid that is really meant for Felicity about the pain of not being able to be with someone you love. It was sweet, but frustrating.

When Oliver returns to the Arrow cave after his battle with Cupid, Diggle, who has been playing the unlikely role of matchmaker for whatever reason, gives him yet another push to just throw caution to the wind and go be with Felicity. Ollie decides to take that chance and sadly witnesses the MOST AWKWARD KISS EVER between Felicity and Ray. Sad face, he walks away and the love triangle continues.

Honestly, that’s really about all that happened in last night’s episode. We got to see more of Oliver in Hong Kong, attempting to bond with the space alien that is Yamashiro’s wife. Obviously something is going to happen there, not romantically of course, but still the flashbacks this time around were less than compelling. Ray Palmer continued to be alluded to as up to no good as he looked over plans of the ATOM exo-suit, but he’s still pretty darn likable. Overall, “Draw Back Your Bow” may not have really pushed the overarching storyline forward, but it was a really good filler episode in the lead up to the Arrow/Flash crossover. So far I think this season has been off to a little bit of a slow start, but episode 7 was fun and enjoyable enough to help solidify Arrow as still one of the best shows out there.

Finally, here are some points I may have missed from the characters in episode 7 that contributed nothing:

Hush Comics gives “Draw Back Your Bow” an A- for making something really enjoyable out of a filler episode.

All images belong to the CW and DC Entertainment. They are credited to Cate Cameron and Diyah Pera.