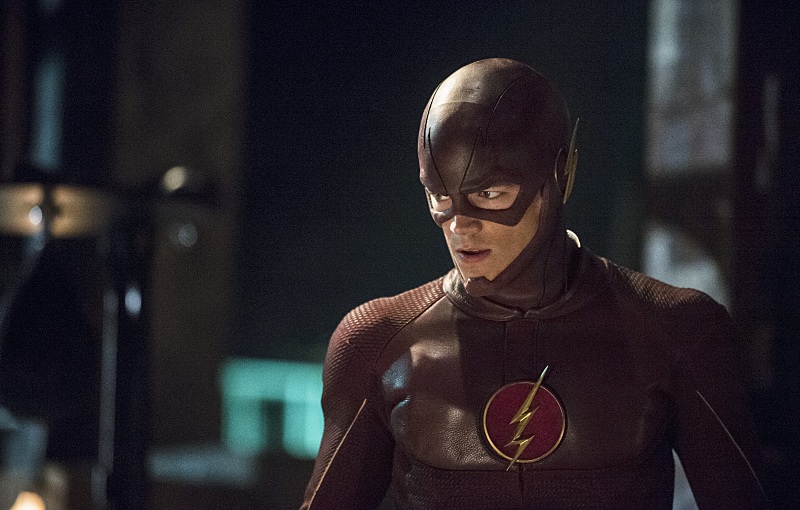 This week’s The Flash definitely opened up A LOT of doors for the wide range of possibilities going on.  While many of the characters remain stagnant in development, the cliffhanger at the end was a shocker.  The dialogue is getting better, and overall it looks like they really could squeeze more than a season out of this show.  So here are my pros and cons of “The Flash is Born.”

Cisco Ramon: Dear Cisco Ramon,  I love you.  You are the quintessential adorkable character.  You are better than Sheldon Cooper could ever hope to be. When you geeked out about Barry hitting Mach 1, I geeked out, too.  When you were serious about going after your childhood bully, I hoped that it would happen.  You are the sole reason I keep coming back every week. Also, your t-shirts rock.  Love, Adrian at Hush Comics.

Girder sticks around: Wow!  They didn’t kill a character this week.  Maybe because they can’t figure out how to kill him, but still.  It’s a step.

Iris West when she was little: Is anyone else wishing that Iris West now would have the gall she did as a little girl?  She sure wasn’t a damsel in distress when she punched Barry when they were kids.  Let’s hope this part of her nature shows up again soon.

Detective Joe West: Ok Joe, I really like you too.  Not only are you played by an amazing actor, Jesse L. Martin, but you are the perfect blend of caring father and tough cop.  I particularly liked the line, “This particle accelerator is the gift that keeps on giving.”  But mostly I enjoyed that you actually did your detective work on Harrison Wells because that guy just ain’t right.

The dark twist: It sounds strange, but I loved that twist at the end.  All of Joe West’s work on Nora Allen’s death is stolen by the same meta-human who killed her, and then they left a picture of Iris with a knife sticking through it, in her chest, hanging on the wall.  Creepy? Very.  But going to a dark place will be good for this show.

Barry isn’t the best at this yet: Barry Allen needs a Yoda.  Basically, he kind of sucks at this whole superhero thing as of right now.  He has killed his fair share of foes, yet feels no remorse, which seems out of character for a man who cares so much about everyone else on the show.  And this episode, he risked a lot by running in front of Eddie Thawne and their perp.  It is only a matter of time before Eddie figures out that Barry and The Streak/ The Flash are the same guy.  Not to mention, that in the fight scene with Tony Woodward/Girder, Barry didn’t tell Iris to run from the scene, and when Barry and Tony were fighting each other with a flag pole, Barry didn’t let go, which would have saved him some damage.  The force is weak with this one.

Those special effects: The beginning of the series had some pretty cool special effects.  I know that this show is on a network that has a small budget, but with all the talk about the Mach-1 stuff, I was pretty excited for the special effects, but instead felt like I was watching The Flash from the 90’s.  Step it up, C-Dub!

Girder, Man of Steel: The baddie of the week was Tony Woodward, aka Girder.  He was created by Geoff Johns and Ethan Van Sciver.  As in the show, he was in an accident where he fell into molten steel, and then be literally becomes steel.  The show added the twist of him being Barry’s grade-school bully. Harrison Wells referred to Girder as “Man of Steel,” a smile-worthy nod to Superman.

Nice of you to show up, Barry: Barry shows up late to work, a habit Barry Allen is known for.  Funny considering he is the fastest man alive.

Heat Wave is coming: With excitement in her voice, Iris tells Barry not only about The Streak, but about a man who is one fire but doesn’t burn.  This is our second reference to Mick Rory aka Heat Wave.  We know he is played by Dominic Purcell, but when is he coming is the question?

This episode opened up many different cans of worms.  Who is Harrison Wells?  What is his past? And does he know about who killed Nora Allen?

Bustle released an article this week with their prediction, which is pretty good.  To sum it up, they say that Harrison’s mysterious wife, Tess Morgan, is a meta-human, was the first meta-human, and is a suspect in the murder of Nora.  While this would explain a lot of things, it does not explain that the killer is in a yellow suit and has the same power as The Flash.  It also does not explain Eddie Thawne’s role in all this.  It also doesn’t explain how Harrison has a newspaper from the future.

Tess Morgan maybe presumed dead, but I think she is the time traveler.  It has been theorized by many fans that Harrison Wells is traveling time, but we have no evidence of this.  In addition, Eddie Thawne seems too nice to be Reverse Flash… yet.  It feels like the writers are trying to develop him in the same manner as Lex Luthor in Smallville was developed.  So what if Nora’s killer is Reverse Flash aka Eddie Thawne, but current Eddie Thawne doesn’t know who he is in the future?  And what if Nora is in the future already and sending information to Wells to orchestrate whatever their master plan is?  Cue evil laugh here!

Hush Comics gives “The Flash is Born” an A- for good use of the “side” characters, revealing more about its enigmatic characters, and appealing to the nerds.

All pictures belong to The CW and DC Entertainment.  They are credited to Cate Cameron.