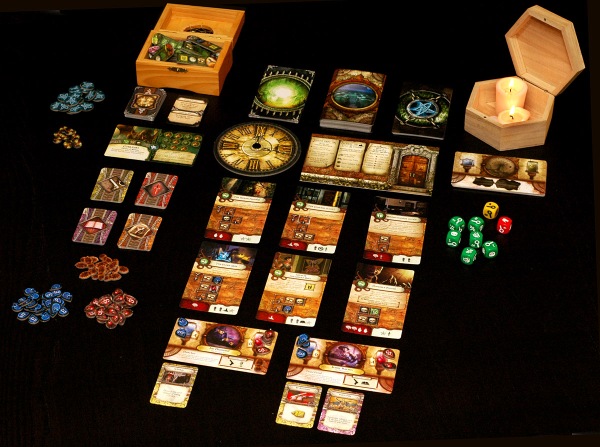 I realize Halloween is a week past, but I want to keep the scary going. Also, it’s completely cooperative so it can be a family game. Look how I tied Halloween and Thanksgiving together! Elder Sign gives you and your friends a chance to fight terrible horrors in an effort to save all of humanity from one of the many ancient gods.  The idea is simple, through the rolls of dice and the use of special items, uncover elder signs to lock away the elder god before he awakens and really wrecks everyone’s day. Oh yes, and it all takes place in the realm of H. P. Lovecraft.

You and a group of other investigators are looking into strange happenings at a fairly creepy museum. As you go room to room there are puzzles to be solved and monsters to be dealt with. All of these problems are handled with the rolls of dice. This game is nearly impossible to win, by the way. As you close down certain rooms and handle certain creatures you gain elder signs. These signs are used to keep the ancient god at bay, if you collect enough you win. But to make it a little harder, with some of the elder signs you gather, more monsters will be released into the museum.

Each of the investigators you can choose to play as have slightly different stats and starting equipment but the gameplay doesn’t differ from person to person.  The private investigator might start with a weapon whereas the scholar might start with a spell.  The other difference is how much sanity or health each character has starting out. Sanity and health keep you character alive, run out of either and you must retire that person. I’ve played where as long as there are still investigator cards left you’re more than welcome to pick up a new one. This is usually a good idea considering the difficulty of the game. A few unlucky rolls of the dice, and you could find yourself dead or insane rather quickly.

You and your group go room to room, which are picked at random, to find awards and hopefully seal away the big bad for another time. This is done by using dice, and consumable items be they spells, weapons, or mystic items. Each room has a certain combination of dice that must come up on your rolls to take the room off the board, instead of numbers though the use symbols. The catch is certain rooms need rolls to be in a certain order and every time you roll the dice, you will lose one or more. This happens even if your roll fails. This game can be punishing.

I realize from what you just read, this game seems confusing, and the bottom line is: it is. There is kind of a steep learning curve, and it will take more than one play through to get the hang of it. And you may have noticed that I’ve mentioned the difficulty of Elder Sign a few times.  I think the bottom line is defeating Cthulhu isn’t supposed to be easy. Dice get locked, monster appear, bad stuff happens. You might be asking yourself why you would want to play something so challenging. Well a lot of the fun is teaming up and helping each other. I really enjoy the wave of cooperative games that have come around recently. The creators added some great theme and style elements to the game. Flavor text brings fun story elements and provides atmosphere. The artwork is wonderful. Everything looks like it’s out of an old pulp book, but with a little more high end quality to it.

Elder Sign is extremely well thought out and put together. You can tell the creators have a love for the source material. It may crush your soul at some times, but that’s half the fun. If ancient evil gods and their minions were easy to deal with that wouldn’t be fun, and it wouldn’t fit into the atmosphere of the game. Elder Sign is a tough game meant to be played with friends, hopefully ones you won’t get mad at if they roll poorly. Go get it just in time for some Thanksgiving Day fun!