What Comic Con would be complete without comic book talent to get excited about? This week— the week of the convention!— we’re focusing on the comic book artists and Cosplayers who will be attending the event. 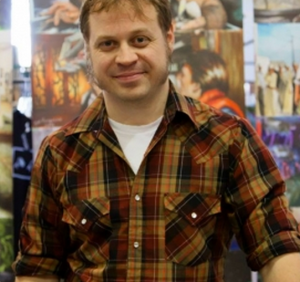 Jim Ferguson is a major pop culture artist and former NASA engineer; a worthy geek indeed. He is shown regularly at the Hollywood Studio Gallery 1988. He is most known for his artwork in The Princess Bride, Adventure Time, Shaun of the Dead, Hot Fuzz, and Ghostbusters. Jim Ferguson will be at SFCC Saturday and Sunday.

It wouldn’t be a Comic Con without at least one comic book publishing company. CCP Comics will be represented at SFCC by McLain McGuire, Atom, Dale Carroll, Jimmie K Rankin, Eric Lumas, Kristeen Parmeter, Patrick Canter, Robert Saiz, and Bill Andres. They are a group of self-publishing comic book artists and writers and are one of the most popular up and coming in independent comic book publishers in Texas. CCP Comics will be at SFCC all weekend. 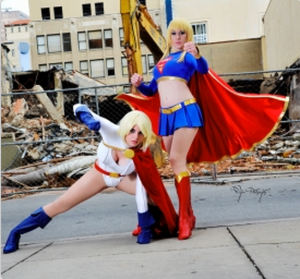 Cosplay is an integral part of any convention. Well known     for being a dynamic duo in the cosplay community, sisters   Remi and Noelle d’Arda make up The D’Arda Sisters. The     two artists grew up around sewing. With a vast variety of     skills, these sisters have won several awards for their             cosplay including best in show as well as being recognized   for their workmanship and performance. Not only are           these sisters amazing seamstresses, they also have               background in dance and martial arts which makes for         incredible performances. Don’t miss this incredible duo         this weekend at SFCC.

With over 100K followers it is no wonder, Rosanna Rocha has been asked to be a Cosplay Special Guest of this weekend’s convention. She is an incredibly skilled video gamer to cosplayer artist and is known for a huge number of cosplays ranging from DC’s Harley Quinn to Disney’s Esmeralda to Morrigan Aensland from Darkstalkers. She is also well known for her pin-up prints which she will be signing during the convention. That is, when she isn’t busy running the Cosplay contest.

So that wraps up our coverage of the many guests that will be attending Santa Fe Comic Con 2014. We’re very excited to see what else this convention has to offer. Look out for our pre-convention panel suggestions later this week and don’t forget to buy your tickets here. Tickets for the whole weekend are $35 for adults and $15 for children. VIP tickets are also available starting at $75. Police, Active Military, and Fire Fighters get in for free!

Charlotte (Charli) Renken grew up in Denver, CO., and graduated in 2013 from Denver School of the Arts as a Creative Writing major. She now attends Santa Fe University of Art and Design as a Creative Writing major with an emphasis in journalism and screenwriting. In high school she studied publication as part of the award winning literary magazine Calling Upon Calliope. During her gap year she began writing freelance for the pop culture website Hush Comics and continues to write for it. She also writes for Jackalope, SFUAD's online magazine. She is unapologetically a nerd. From Cosplay to Muggle Quidditch to sifting through stacks and stacks of comic books, being a nerd is her favorite pastime. View all posts by Charlotte Renken