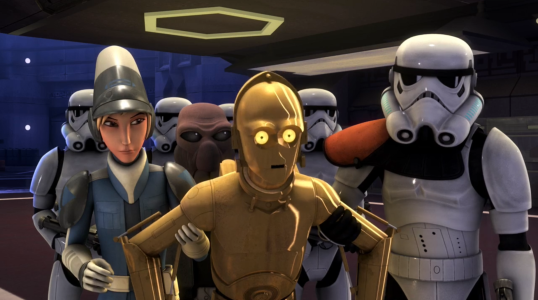 One thought that I had at the end of the Star Wars Rebels premiere movie/episode was, “I wonder how long it will be before Weisman brings in a classic character?”  Fans and I received an answer to that question in this week’s episode.  What better set of characters to make this appearance than the very first heroes to ever appear on the silver screen – C3PO and R2D2!!

Ezra, Kanan and the other rebels, desperate for credits, run into the dynamic duo during a theft mission.  The golden protocol droid and the spunky astromech droid are as entertaining as ever.  Constantly bickering and always annoying those in their immediate vicinity, I found myself smiling and reminiscing about the droids first encounter with the Tatooine desert in Episode IV.  The Rebels creative team did the pair justice!  The most entertaining aspect, however, of these inseparable bots is their interaction with Chopper, the rebel’s fiery C1-series astromech.  Chopper has a hilarious “come at me bro” moment directed at R2D2 that legitimately made me laugh out loud.

While the droids were the initial focus of the episode, attention quickly shifted to Zeb and his background.  My younger brother asked me after the Rebels premiere, “what IS Zeb?”  Meaning, what alien race is he?  A legitimate question!  Until Rebels, there have been incredibly few mentions of his kind anywhere else in Star Wars lore.  Zeb is a Lasat.  Hailing from the planet Lasan, the Lasat race was known for its fighting ability and their loyalty.  I use the term “was” intentionally.  We learn in this episode that the Empire has wiped out most of the Lasat.  It’s well known that the Imperial Empire was very intolerant of alien life form, so to see this theme maintained in this new show is gratifying.  Here’s a fun fact:  the Lasat race is based on Ralph McQuarrie’s original concept art for Chewbacca!

With a strong team effort, and despite interference from C3PO and R2D2, the rebels are able to pull off the theft and make their getaway.  Unfortunately for them, the high profile snatch-and-grab did not go unnoticed.  Agent Kallus – the man who, by now, knows the profiles of the rebel band very well – jumps hot on the trail of his quarry.  As the rebels pawn their stolen goods, and with some assistance from the always clueless C3PO, Kallus springs a trap and attempts to take down the troublemakers.

Another aspect I love about Star Wars, pertaining specifically to Imperial generals and commander, is that bad guys are never afraid to get dirty and actually lead their men.  It’s endearing and redeeming (to an extent) witnessing an army commander take up the head of an attack, instead of driving from the back.  I tip my hat again to Weisman and his team for giving Agent Kallus the qualities of an Imperial commander that I respect.  Not only does Kallus lead the attack in this episode, but he holds his own going one-on-one with Zeb, arguably the strongest member of the rebel team.

If there’s one thing the rebels excel at, though, it’s escaping.  Even in the most overwhelming circumstances, this team knows how to get out of a bad place in the nick of time.  Not wanting to deal with any more astromech feuds or listen to 3PO’s “fluent in over 6-million forms of communication” spiel AGAIN, the rebels drop off the droids with another Star Wars classic, Bail Organa!  This meeting of the rebels and Bail is the first real hint at there being a greater plot at work.  Bail Organa is an original founder of THE Rebel Alliance that would eventually take down Palpatine’s Empire.  I don’t interpret Kanan and Bail’s introduction as coincidental.  The gears are turning and the formation of the greater Rebel effort has begun!

Hush Comics gives “Droids in Distress” a B for bringing in original characters, a good use of small plot, and a window into the massive world that is to come!