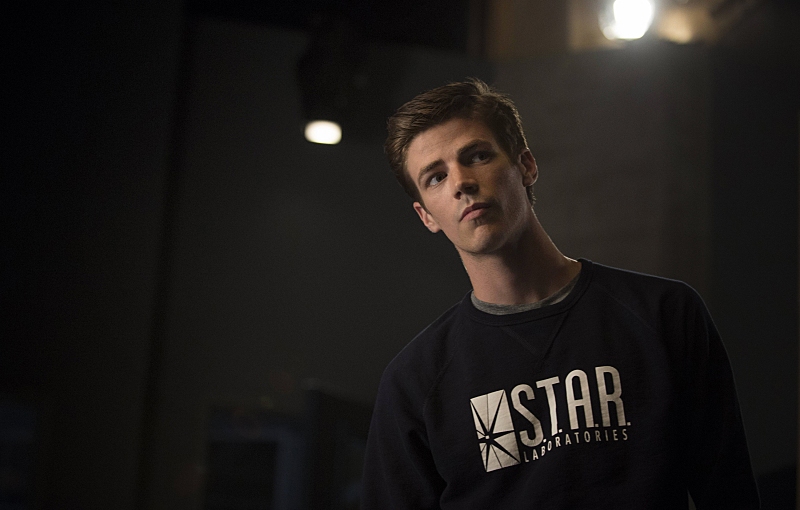 One red blur of a week later and we arrive at the second episode of The CW’s new show, The Flash. The pilot absolutely blew us away, and we expected nothing less in the episodes to come. For better or worse, that’s precisely what we got in “Fastest Man Alive.” We saw the creeping evolution of character development, and started peeling back the layers of a major story that will eventually trap us for good. For now, however, we are subject to the same formulaic approach that all superhero shows seem to be getting at.

We get the same ubiquitous superhero voiceover, which is kind of weird since the opening segment follows an actual “intro thingy,” making his off-hand comment about it all the more awkward. We are also allotted another bad guy, affected by the storm caused by the particle accelerator, who tests Barry’s superhero aptitude. It’s not that this hurt the show’s overall momentum, but I just expected a little more variation from the pilot in terms of where the heck we are going from here. The flashback scenes didn’t reveal much more than we couldn’t already assume ourselves, nor did the drawn out speeches (again, where Barry needed to be pep-talked into saving people) inspire anything that we couldn’t have gotten from a few episodes of subtle action.

I usually refer any out-of character or otherwise eye-rolling cornball tomfoolery as being “so C-Dub,” a characteristic we’ve been doling out since the days of Smallville. The amount of C-Dub-ness in “Fastest Man Alive” approached dangerous levels, far exceeding the pilot episode, which came off as spiriting and exciting. I can only hope that Barry won’t continually need pep talks to fight crime. Barry Allen is a bleeding heart with a great sense of humor, but there needs to be a better balance between the two qualities. A tragic Oliver Queen makes sense since, you know, he was tortured on a deserted island for five years; a tortured Barry Allen just doesn’t fit.

The areas where The Flash continues to impress are its amazing supporting cast and great special effects. Although Barry Allen is now 0 for 2 in keeping the bad guy alive, the bad guys that show up are convincingly creepy and – dare I say – relatable? The story of Multiplex is a very pliable tale of sorrow and revenge. The villains are also frightening people who wear the villain scowl very well. As Barry, Cisco, and Caitlin continue to search for more meta-humans, this made us wonder if any good people were struck by the particle-accelerator’s storm, or if it only spawned a ton of tragic criminals. Either way, successfully implementing these more obscure DC Comics villains is what makes The Flash more fun to watch than say Gotham, whose token bad guys look like they are pulled from a hat (still got my fingers crossed for Kite Man).

Cisco and Caitlin continue to provide back-up for Barry as he dashes in head-first to help people. Well, Cisco continues to dive in head-first and provide Barry with the toys (Cosmic Treadmill, anybody??) while Caitlin scolds disapprovingly. It’s worth noting that Flash looks to “help people” and “make a difference,” while other Leaguers in DC Comic books have the mantra to “bring justice” and “stop crime.” Barry’s greatest asset has always been his heart, and it is an endearing quality in the show… just not when it comes to Iris West. Comic book fans, and people you use their eyes or ears to watch the show, will know that Iris ultimately becomes Barry’s greatest love interest. With the flirtatious way she touches and looks at Barry, it’s remarkable how dense she is that he is Forever Alone in the friend-zone while she galavants with Detective Eddie Thawne. The story either needs to stop being about her, or make her more likable to the millions of viewers at home who fervently get the point.

Another win for The Flash were the short demonstrations of Barry’s power. Whether it’s saving people from a burning building, vibrating his hand to simulate a centrifuge on a test tube or going Keanu Reeves on 100 would-be Agent Smiths, there is no doubt that the producers on The Flash want to give the audience the full superhero effect. This is made even more tantalizing when you think that this is just the beginning. The full spectrum of Flash’s powers is ridiculously awesome and include: creating a nifty way to store his suit, running so fast he can turn back time, vibrating through objects and eating a restaurant full of tacos in one sitting.

Hush Comics gives “Fastest Man Alive” a B. Ultimately, The Flash is shaping up to be one of the better superhero television shows on TV. The supporting cast complements Grant Gustin’s Barry Allen very well, serving as both an emotional anchor, as well as a tactical one. However, there seems to be just too much of the same thing going on here as we gathered from the pilot. To a degree, that is one of the episode’s biggest strengths; we realize that Jesse Martin, who plays Detective Joe West, is Barry’s rock here, and the conversation the two of them share at the end of the episode solidifies that (it also whispers “DOOOOOM!” for Joe to me, but I am a cynic). I know there is so much more to explore, and that makes me all the more confident that The Flash will continue to impress.

All photos belong to The CW Network and DC Entertainment.  They are credited to Cate Cameron and were originally found here.

The Treadmill!: Ah! The Cosmic Treadmill. First appearing in comic books over fifty years ago (Flash #125), the pretense of the treadmill is that Barry can run so fast on this treadmill that he not only alters the fabric of time but can use it to travel to alternate dimensions. Science, bitch! Seriously though, let’s see Superman do that!

Iris’ new career choice: “Oh I’ll just make one up.” Really, Iris? Ms. West’s new-found career as a journalist is off to one crappy start. In the comics, Iris becomes a tough-as-nails reporter, but it looks like she’s faking it until she makes it in The Flash.

Pew Pew: The gun shop that Multiplex robs is called Hex’s Gun Shop, inspired by the gunslinger Jonah Hex, who for some reason can’t catch a break (canceled comic book, horrible movie). It seems the writers have a soft spot for him.

Multiplex: The villain multiplex is one of the villains in the DC Universe I think deserves a little more credibility. He may be a complete rip off of Marvel’s Multiple Man, but Multiplex is one of Firestorm’s villains in the comics, Danton Black has ties to both the Suicide Squad and Caitlin Snow (in the way of Killer Frost). From Arrow, we know that the Suicide Squad already exists, but Black’s apparent “death” at the end of “Fastest Man Alive” sure nixed that possibility.

Wait, Ronnie?: Harrison Wells reveals that Caitlin’s ex-boyfriend was (is) named Ronnie. The internets have already swarmed over the fact that Ronnie Raymond will be reappearing, and it will be as one-half of Firestorm, but this is really the first confirmation from the show that Ronnie and Caitlin will likely share the same relationship as in the comic books.

“We were all struck by that lightning”: Barry’s cheesy speech at the end of the episode could have a more literal meaning to it than we think. We already suspect that Cisco and Caitlin will reveal themselves as meta-humans, and there’s no doubt that this weirdo Harrison Wells has some powers we haven’t been revealed yet.

Speaking of Harrison Wells: Looks like my theory last week of Wells being Barry Allen crashed and burned to the ground after he stabbed ol Staggsy in the final clip of this week. In spite of recent events, we have not always known Barry Allen of the future to be benevolent; in DC’s New52 installment of The Flash, Barry Allen comes back in time to kill the current day Barry Allen to prevent the Speed Force from collapsing. We’ll undoubtedly get more into the Speed Force in subsequent issues. But it seems prevalent to note that Wells is concerned for Barry’s safety, cautioning him to “know [his] limits” and “exercise restraint.” What investment could he possibly have in Barry Allen?

One thought on “The Flash Review – “Fastest Man Alive” S1E2”