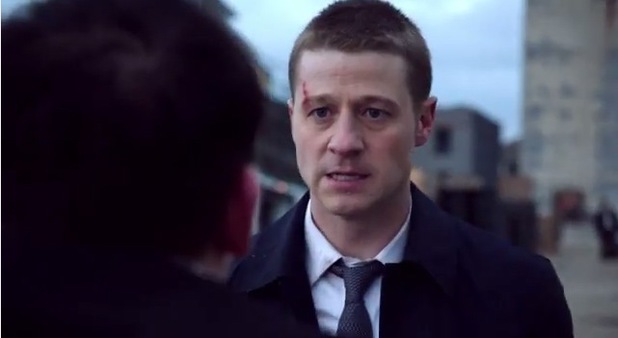 Did they really just cram SEVEN rogues from Batman lore in the 45 minute premiere episode of Gotham?  Plus one that never existed until now?  Seven!  In case you missed it, there was: Joe Chill, Catwoman, The Riddler, The Penguin, The Joker, Poison Ivy, and Carmine Falcone.  Then you can throw in Fish Mooney, and for that matter Butch and Frankie, who by the way is terrifying.

Back to the original rogues, though.  The episode was only 45 minutes (ok, ok, it was 48 minutes and 51 seconds) and they felt the need to cram that many characters in?  There is a difference between Easter Eggs and the Full Monty; Gotham could benefit from toning down its Full Monty.  Even Batman Forever was more subtle.  And then let’s talk about Fish Mooney.  Not only were here lines over-the-top, but so was her delivery.  I love Jada Pinkett-Smith.  I do.  But her performance as Carmine Falcone’s lackey was so ridiculous, it was almost laughable.  Added to which, it turns out her character had almost no point once Falcone appeared, undermining everything she had done the entire episode.  But I’ll get to Falcone later.

As for the rest of the villains, Catwoman, who is really just Catgirl at this point, had the most screen time other than Falcone and Oswald Cobblepot, but didn’t have a single line.  The explanation of her obsession with Bruce Wayne is the only decent twist to the story they made; she witnessed the murders of Thomas and Martha Wayne.  Aside from that story line, though, her role had little substance.  I am hopeful that since next week’s episode is titled “Selina Kyle,” her character will be more fully realized without the distraction of all the other baddies.  Oh, and Edward Nygma is the forensics guy for GCPD?!  That department must be in more trouble than we thought because who in their right mind would let that creepy dude handle ballistics?  Then there is Poison Ivy.  I really have a problem with her.  Maybe not her, but the writers.  They had to spell it out so much for the audience that they named the girl Ivy?  Come on, now.  Fans of the Batman story know who Pamela Isley is, and if they don’t, they will catch on just because she has red hair and is playing with plants.  I really have a problem with how Gotham was so willing to give things away to the audience instead of us just figuring it out on our own.  As for Joe Chill, at this point the unnamed murderer of the Waynes, it is clever to have him out in Gotham still; something that could culminate into a great plot point, but I just hope that it isn’t a constant theme in the series.  The villain who does seem to be driving the plot at this point is Oswald Cobblepot AKA The Penguin.  I really liked him.  He seems like a formidable scary baddie.  The actor who plays him, Robin Taylor, can do crazy really well; he was insane without being over-the-top, but the writing for his character was still something to be desired for.  He claims to be clever, but goes to tell on Mooney to the Major Crimes Unit’s Montoya and Allen in BROAD DAYLIGHT!  Clearly, The Wire does not exist in the Gotham Universe.  Somewhere Bubbles is shaking his head.

I guess it is about time I get into the actual plot of the Gotham‘s pilot episode.  The episode starts off with the murder of Bruce’s parents.  It was abrupt and ill-fitting.  If I was an alien from outer space and I had never heard of Bruce Wayne or Batman or Gotham City, I would have absolutely no connection to this story line.  There was no build up, and Bruce’s reaction seemed strange with that muted scream.  I believe there should have been more background on the Wayne family in order to get anyone to care about their deaths.  Perhaps this is because this is James Gordon’s story and not Bruce Wayne’s; however, the two are so interconnected that instead of James comforting young Bruce with the story of how his parents died, the show could mirror the two characters by using flashbacks.  Arrow uses flashbacks extremely well to push a story forward.  I said before that Gotham was too willing to feed us information instead of showing us – the flashback technique would take care of that, and in the meantime give the audience more insight into Gordon since he is the main character.

While I am a fan of Ben McKenzie as James Gordon, his partner, Donal Logue as Harvey Bullock, seems out of place. Logue’s resume is impressive, so it is difficult to pinpoint if it is his portrayal as Bullock, or if the writing for Bullock isn’t stellar.  It could be both, but I did not like this version.  If he will continue to be second billed, his character needs to be much stronger.  Bullock has always been his own man – the type who breaks the law, but for the greater good a la Jimmy McNulty (again, The Wire must be referenced)  This Bullock seemed like a whipped house cat.

As for Barbara, Gordon’s girlfriend, the biggest story line for her is that she is a former lesbian.  FOX really knows how to be progressive – by making the gay couple two overly attractive women.  The good thing about this is that it started the #Gaytham trend on Twitter and brought us this wonderful piece of wisdom:

truth time: that sandwich did look good. I probably would have killed that guy and taken it too. #Gotham #Gaytham #Gothampremiere

Other than her sexuality, Barbara’s character didn’t add much to the story.  Her dialogue was terrible, which makes me sad because this is the most attention she has ever gotten in a story.

Finally, let’s talk about Carmine Falcone.  The best part of the episode was the last 10 minutes.  But it was a enough for me to want to come back.  Falcone, the mob boss of Gotham, saved the day.  Not only for Gordon, but for me as an audience member.  The tease of some history between Falcone and Gordon’s father is a very interesting twist on Gotham’s history.  And Falcone had the best line of the episode – “You can’t have organized crime without law and order.” Brilliant!  It’s hard not to be impressed with Falcone, though.  After all, he is played by John Doman, Rawls from, you guessed it, The Wire.  His acting prowess is superb.

Speaking of The Wire, I saw so many instances where Gotham could be a version of the HBO classic, but ya know, with Batman.  There are many opportunities the show could explore when it comes to crime, criminals, the police, and our society as a whole, especially because we are involved closely in the world of the Gotham City Police Department.  It was hard to swallow the changes to the story.  I am trying to be open, but it is hard to fight the nostalgia for some of the “original” stuff. While the majority of the episode was overdone, there were some glimmers of light for the show, particularly Gordon’s and Falcone’s individual moments.  The end was predictable, but the “rivers of blood” thing that Penguin yelled about was laughably intriguing.

Hush Comics gives the Pilot episode of Gotham a B.  While there were many eye-roll moments, and too many characters introduced at once, the dynamic between James Gordon and Carmine Falcone will keep me interested in what happens in Gotham.