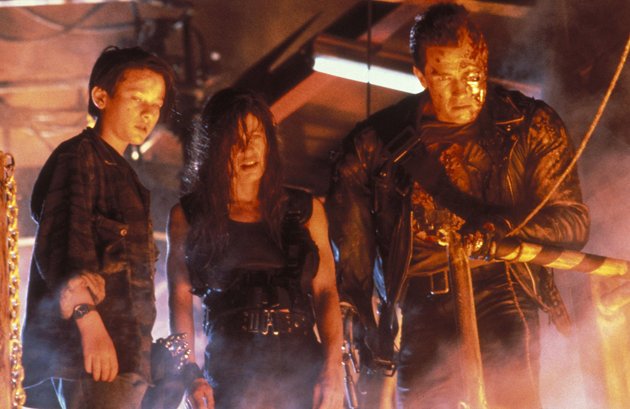 I only ever saw the first Terminator movie once, when I was five or six. It scared the crap out of me (as a lot of the movies on my list seem to have a habit of doing, except for Predator, oddly enough). As a kid, I remember not having a firm grasp on the difference between actors and the characters they play. I knew, obviously, that movies weren’t portraying real events, but that (to some extent) the actors were having genuine experiences. It’s a difficult concept to track and lacks internal logic: evidence of it as the idea of a five year-old mind. But if you can humor the me of 1988, the moment where the T-1 is performing self-surgery, my brain interpreted that as the moment where the real life Arnold Schwarzenegger (his name is in Google’s dictionary. Weird.) was discovering that he, the actor, was in fact a robot. What terrified me more than this nonsense-relization was that he seemed to be so unfazed by this realization. As such, I never saw it again and it was crystallized in my mind as one of the scariest things possible.

Fast forward twenty years later and, with my views on James Cameron having so drastically shifted, I was concerned the movies (the first and second, the second of which was a long time favorite) wouldn’t be any good any more. I was glad to find that was not the case and the movies largely continued to hold up. I did find that for my purposes, however, the first one was a little philosophically empty and, therefore, difficult to deal with.

My initial thoughts were regarding the fear that machines will somehow spring to life and make the annihilation of human life its primary concern. Going back to What Technology Wants, the book by Kevin Kelly from my previous post, it is argued that the world of technology (or the technium as he coins it) is the seventh kingdom in the animal world. This sort of stuff makes you feel like a madman to discuss in polite company, but if you read his book (you should), he makes a compelling argument. Kelly discusses in his book how, like prior kingdoms, the technium is rising on the backs of mammals. He also argues that, like has yet to happen in real life, no new life form appears with the express desire of eliminating a prior life form. He acknowledges that sometimes it happens as an unfortunate side effect – such as with ice age humans and the evidence that they hunted the mammoth to extinction, or with the cyanobacteria annihilation of many anaerobic species – but for a species to make a willful attempt at annihilation of an entire other species or kingdom would be unthinkable.

Related is Roko’s Basilisk, which briefly summed is the idea that a hypothetical all-knowing machine might decide to punish those that didn’t help create it and reward those that helped it greatly. Though I think science fiction movies have yet to really explore this notion: machines are here to punish us for our sins.

And this is where the second one comes in. The first movie is a tightly told horror story, and it should be appreciated for the serious way in which it approaches a concept that, with any lesser candor, would be goofy (oh hai Terminator 3). But the second one informs us what these movies are really about: Judgment Day.

For some of us, Judgment Day has been separated from its ominous roots, making it a judgment day, but the phrase and the idea is strictly a religious one. It’s the day Jesus comes back to judge the works of humanity (spoiler alert: we are found wanting) and takes up the ones who have earned favor. This reflects Roko’s Basilisk in a way where “hypothetical all-knowing machine” is replaced with “hypothetical all-knowing man-deity,” and “punishes those that didn’t help create it” is replaced with “punishes those that don’t believe.”

The problem in the world of The Terminator is that these aren’t simply events that happen, something that occurs and the fallout of which must be dealt. Judgment Day is specific punishment. This is where Kevin Kelly’s (perhaps unprovable) assertion runs aground: whether or not machines become aware and assume a state of benevolence doesn’t matter because we as humans feel like we deserve punishment. It’s perhaps our own guilt coming through these movies than any kind of rational fear. Fearing bears when one is slathered in beef jerky in the woods is a rational fear, but fearing that robots would like to murder us because our phones are getting fancier is not.

The first two Terminator movies are, I think, probably Cameron’s best. The philosophy is the most tightly contained, and the running times least insufferable. And it’s perhaps thanks in part to that fear he was trying to voice: robots probably won’t rise up, but we deserve it for our sins. Numerous sins we knowingly continue to perpetrate: sins of cruelty against each other; sins of exploitation against our resources; sins of abuse against our environment; the sin of refusing to acknowledge other creatures’ right to life. These movies aren’t, perhaps, expressing a fear, but a desire we fearfully crave: the desire of the guilty to be punished and the relief that comes after penance. The problem, however, is who will punish us when god is dead? Cameron tells us that it will be the thing most like god (second to God himself, and a little higher than ourselves perhaps), the thing that is everywhere on the planet at once, has near omnipotent knowledge, and, if hundreds of years of philosophers are correct, a child of our own creation like god.

Stick around (by which I mean click the page 2 button) for parts three and four.