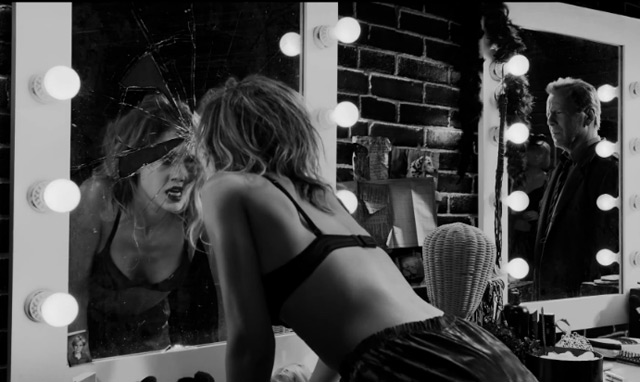 Alluring element – Ten years ago, you loved Sin City, so the second one should be just as awesome, right?

Ten years ago, fanboy director Robert Rodriguez had blown the comic book movie genre wide open with his adaptation of Frank Miller’s first Sin City graphic novel. The 2005 film had plenty of star-power, and really revolutionized the way the green-screen was used. Nearly the entire movie had been filmed in front of one, allowing for various props and scenery to be added artificially during post-production. It was a concept that looked aesthetically pleasing, and made it satisfyingly similar to the comic books that the movie was borrowing from.

Thanks to the movie bombs that were Robocop 2 and Robocop 3, Frank Miller had been all but turned off from Hollywood adaptations, but Rodriguez was determined to make it work. He put together a short vignette for Miller to show him what he wanted to do with Sin City (video below) and even withdrew from the Directors Guild of America in order to credit Miller as a co-director. The film was a commercial and financial success, surprising an industry who was growing drunk on the premonition that only big-name comic books like Batman, Spider-Man and the X-Men could carry their own films. Establishing the nickname “One Man Film Crew,” Rodriguez just about does it all. Nearly a decade later, Rodriguez and Miller teamed up once more for the sequel, Sin City 2: A Dame to Kill For.

I just recently picked up the Sin City comic books in order to really get the inspiration for the movies. I was very impressed how exactly like the books the movies are. There is, of course, the neo-noir style filming. Then there are the character designs, gore style, and even the dialogue. I could recite lines from A Dame to Kill For and they were exactly how they came out of the actors’ mouths. There were times when this was satisfying, but others that felt down-right ridiculous actually coming out from somebody’s lips. For better or worse, A Dame to Kill For was the exact same story on film as it was on paper. Unfortunately, it happened to be one of the worst stories I have ever read.

Before I utterly rip into this film, I want to express that A Dame to Kill For could have been good. There are a lot of “almost”s and “if only”s we threw around after the credits rolled – and, although not realistic, the movie could have been saved by actually omitting some of the more crude content and deviating a bit from the source content. There’s no denying that this franchise is a one-trick pony. You’re guaranteed two hours of obscene language, over-the-top sadistic violence and a bunch of boobs. What I wasn’t expecting was how disturbingly weird and misogynistic this installment would be. There’s something to be said when I raise an eyebrow more to A Dame to Kill For than the first film, which is centered around a guy who kidnaps women, eats them and feeds the scraps to his dog.

There’s really no way of getting around the fact that Sin City 2: A Dame to Kill For was a bad movie. The best way I can describe Sin City 2 is that it’s Sin City with erectile dysfunction. The same moves are there, the acting is in many cases better, but there just isn’t enough to make it enjoyable.

I’ll put it out there: Sin City 2: A Dame to Kill For sucked.  I also apologize to the group of people who love me enough to come see the movie with me for my birthday this past weekend.  Our time would have been better spent  doing absolutely anything else.  Harsh you say?  No, not really.  Unlike my other half, Sherif, I have not read the graphic novels.  It was a plan of mine to read them and then review, but after seeing the follow-up film, I don’t plan on continuing on with the franchise.  I feel so strongly about how bad Dame was, that it may have tainted the first Sin City for me, a film I really loved.

I could nitpick that the green screen was badly done this time, that the dialogue was corny, Eva Green was badly cast as “A Dame to Kill For”, or that Joseph Gordon-Levitt was only cast because he is awesome, but that ultimately his character had no point.   But the reality is that the movie failed on two much greater levels.

Let’s talk about the plot first.  Sin City is famous for its vignettes, and the comics (there are six volumes) did a great job of showing the same vignettes from different point of views (thanks Sherif for telling me that).  But that translation onto the screen wasn’t so great.  Perhaps it was because there was 10 years between the first and second movie, but the timeline seemed very disjointed, and in actuality, not possible.  There were three main plots in the sequel, and all of them made me wonder why I should care.  Plot A: Joseph Gordon-Levitt gambles against the Senator, then he gets his fingers broken, gambles again, and then wins forever, except he dies.  Oh by the way, spoiler alert.  Plot B: Eva Green AKA Ava shows her boobs a lot, screws men, calls herself a slut, kills said men, and then shows her boobs some more.  Plot C: Nancy Callahan drinks herself into a tizzy, learns to shoot a gun to avenge Bruce Willis, dances at the saloon more but 10 years later so its not as sexy, and then she dresses like a Matador and says “Fucker” in the most hilarious way possible before the credits roll.

To be frank, I cared most about Joseph Gordon-Levitt just because I think he is cute.  However, the story was fruitless.  It related the least to the rest of the film, and then he died.  Why am I supposed to care about him?  I know nothing of his background and he had no redeeming qualities.  Then there was the black widow, Ava.  I don’t really care that she is crazy and kills her lovers.  Usually, that sort of story is slightly intriguing, but it was acted badly by Eva Green and in the end it didn’t matter.  Because she died.  And then there was Nancy who was avenging the forced suicide of John Hartigan (Bruce Willis).  I suppose this was the draw for many people, but it wasn’t fascinating to watch an exotic dancer becoming a self-abusing drunk.  Particularly because it wasn’t a convincing act while she was contemplating the murder of Senator Roark.  Avenging death is cool and all, but when you weaken yourself in the process, I don’t have much sympathy for you.  Since the movie was made 10 years later, I would have liked a reminder of why I should care.  Instead, I walked away feeling like I just wasted two good hours I could have used playing Diablo 3; a story that equally doesn’t matter, but at least I get to shoot stuff.

Now let’s get into what is more important about why this film disgusted me.  I’ll give you a hint; it wasn’t the overly cheesy nachos I ate, but I’m sure that didn’t help.  It was the Bechdel Test.  If you don’t know what the Bechdel Test is, it is a test for film that must follow these three rules: It must have two women in it, who talk to each other, about something other than a man.  There are some modifications of this rule that say the women must have names, too.  Sure Dame has more than two women in it, but they are nothing more than props for the use of men, no matter if Ava was killing some of those men.  The women only talked to each other in one brief scene with the vigilante prostitutes, but it was about men.  More often than not, women were not called by their own names, but rather by epithets for women that are not only overly used in our society, but were so overused in the movie, that I forgot the names of the characters.  You could say that most movies don’t fit the Bechdel Test, and you would be right.  Some of my favorite movies don’t, yet I don’t find them overwhelmingly offensive to women.  We are not props to use for “lucky” gambling.  Watching us dance in a saloon is not the solution to your problems.  Sleeping with us is not the solution to your problems.  Calling us “Bitch”,”Slut”, and “Whore” will not garner respect.  Portraying us by showing overt sex scenes and implying we have the power by showing promiscuity is not women’s liberation.  It was appalling at how poorly women were portrayed.  Even the “strong” female, Nancy Callahan (Jessica Alba) was a drunk who cut herself all in the name of a man who she thought was her only protection.  And she got shot at the end, sans the dying, but she still was weakened.  And for God’s sake, put Eva Green’s boobs away.  Yes they are nice, but it crossed the line of “Great rack,” to “Yeah, I get it.  She has a nice set of breasts.”  I am painfully aware of Frank Miller’s writing style and his personal bigotry, but in the modern day, is it too much to ask that if you are going to make a movie based off his work, its a little less …misogynistic?

All this being said, A Dame to Kill For is not a complete loss. Robert Rodriguez’s green screen filming method adds a lot of character to the film, and even if the characters run in place like Adam West and Burt Ward in Batman, a part of me gets lost in the moment. There’s also no shame in admitting that the Sin City franchise has completely captured the neo-noir atmosphere better than any major motion picture has in the ten years since the original came out. Now the heavy sigh… maybe we should just come to the conclusion this Sin City movie didn’t need to be made.

There’s no doubt that Frank Miller the writer is a legend, with books like The Dark Knight Returns, Robocop, 300, Ronin and some of the best Daredevil books ever published under his belt. His best work is gritty, ultra-violent, and has severe political “fuck-you”ness tattooed on each page. On the other hand, he’s also the stereotypical chauvinistic a-hole that today’s industry is fighting against – the middle-aged straight white man, who wants the industry to stay straight, white and male. He uses racial slurs liberally and openly pokes fun at the gay and mentally challenged. Just see what he did to Batman in All-Star Batman & Robin, or the ridiculous black-face he gives his African-American characters. Or the whole damn Holy Terror book.

For better or worse, though, this has been the same Frank Miller for over thirty years, and asking Robert Rodriguez to tone down Frank Miller’s source content is just unrealistic. There are plenty of other books of his that deserve our attention, that aren’t riddled in reminders of how far we have come as a nerd industry, only to regress using special effects. Honestly, I’m ready to put this whole thing behind me if Robert Rodriguez can admit that the All-State guy is not a suitable replacement for the late, great Michael Clarke Duncan. There will always be a demographic that loves what A Dame to Kill For was made of, but unless there is some sort of compromise on content, Miller and Rodriguez will see this franchise fail time and time again.

One thought on “Sin City 2: A Dame to Kill For Movie Review”