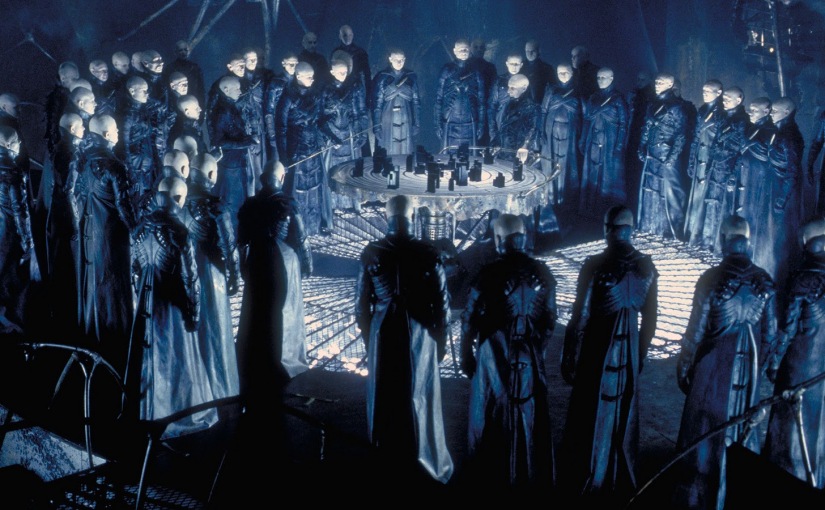 Cypher and Thirteenth Floor share more in common with each other than either shares with Dark City. Namely: Dark City (turns out) is a really good movie, and the other two do that marathon runner thing where they stumble and poop all over themselves when they get near the finish line.

Cypher is all about warring corporations and the way they dehumanize humanity in the process. It starts off with the profound paranoia that I love: it has double and triple blinds as brainwashed characters are brainwashed and placed as spies-within-spies within warring corporations. The main character, Ferguson (or Sullivan, depending on when in the movie you catch him) is hired by Digicorp to spy on Sunway. I couldn’t tell if they were insurance organizations or software, but ultimately it doesn’t matter. Ferguson’s job is to sit in the conferences at conventions and transmit illegally recorded information. He meets Rita (Lucy Liu) who tells him to “take these pills” and he instead discovers that the conferences are a front for brainwash experiments very reminiscent of A Clock Work Orange. Then things go crazy and a little bit hard to follow for awhile, and then it turns out nothing really matters. It was all an attempt to save the girl he loved, so all those important things it was saying about corporate dehumanization? Ignore that, because really, it all comes down to the last five minute reveal where you discover that, secretly, Lucy Liu was his wife the whole time and he was the secret mastermind behind all of it. They kiss on his yacht, and slow pan to sunrise.

Thirteenth Floor is kind of the exact same thing. The founder of a powerful virtual reality company is killed, and all signs point to the one guy who absolutely could not have done it. Convinced the murdered founder left him clues in the virtual world, he jumps in and does some digging to discover that the people in the virtual world (modeled after 1937 L.A.) are as real and convincing as anyone he’s ever met.

The movie begins (much like Cypher) to ask some profound and cogent probative questions: what’s the boundary between real and replication, and at what point does that boundary no longer matter? If you discover you aren’t real in the physical sense, does that matter if you still feel real? Like Dark City, if you have the sense of history and of being related to a place in space and time, even if that place and time are illusory, don’t those memories help inform you as a person? And if not, you still feel, think, reason, and exist don’t you? In 1937 L.A., the hero encourages a bartender to “go somewhere you’ve never been before,” the reasoning being that the bartender will attempt to go to a place that doesn’t exist in his virtual world and see that there’s nothing there. The bartender does, and in response, he turns into a psychotic murderer.

Likewise, one level up in modern day, the murdered founder’s daughter starts encouraging Hall (the protagonist and number one suspect) to explore his own reality, and in the most profound scene in the movie, he picks a road and drives in a line blowing through a “road out” barrier where he discovers the edge of the world. The road becomes fragmented and disappears in blackness as a green wireframe mountain range rests against the same blackness: Hall himself is a simulation. And he’s the murderer. At least, the person who inhabits his body from one level up murdered the company’s founder. Things happen, and thank god, he’s brought out into the topmost reality where he can be reunited with the woman he (apparently now) loves: the founders not-actually-daughter. They kiss on the porch of their ocean side apartment, slow pan to sunrise.

My whole life I’ve had a suspicion of love stories in movies. Far beyond the usual adolescent male (well, as far as culture tells us it’s adolescent male) aversion to mushy stuff, whenever a movie or TV show introduces a love story which (more often than not) is undeserved, I roll my eyes and groan. These movies are excellent examples of why: the movies spend time, effort, and story building fascinating, eerie, paranoid worlds. The heroes are constantly struggling to be able to comprehend even a scrap of these worlds while events refuse to slow down, this action filling them with anxiety and driving the story with tense mystery. But in each story, around the 11th hour, each world is revealed to be totally meaningless because love. Love is used as a convenient tool to stop exploring the bigger questions like, “Wait, corporations are brainwashing people with drugs and abusive audio/visual presentations? We’ve got to do something about that!” and, “Wait, the people inside the simulation are sentient? And the people inside the simulation inside that simulation are also sentient? How do we know we aren’t also the simulations? Is the universe real? We’ve got to do something about this!” Love is abused as a way to trick people into thinking they just saw something profound, but really, it’s a lazy writing technique to allow the writers to avoid dealing with the issues.

Which is why Dark City excelled. Murdoch, its hero, has memories of being married to Jennifer Connolly (well, her character). He has neither feelings of love or a sense of marital duty, but he does have the burden of being the one truly enlightened character, and that alone gives him a sense of responsibility large enough to care for her, regardless of his feelings, and learn to foster a relationship after his big questions were dealt with.

And on the topic of paranoia, it’s why X-Files excels: the questions are so big, there’s no opportunity for romance (until the show’s almost over that is). More helpful than a damsel in distress is a trusted confidant and equally gifted conspirator.

Last in this quartet is Yesterday Was A Lie, an indie movie so tiny that I think I’m the only person who actually saw it.

Click on page 3 below to read about Yesterday Was A Lie.