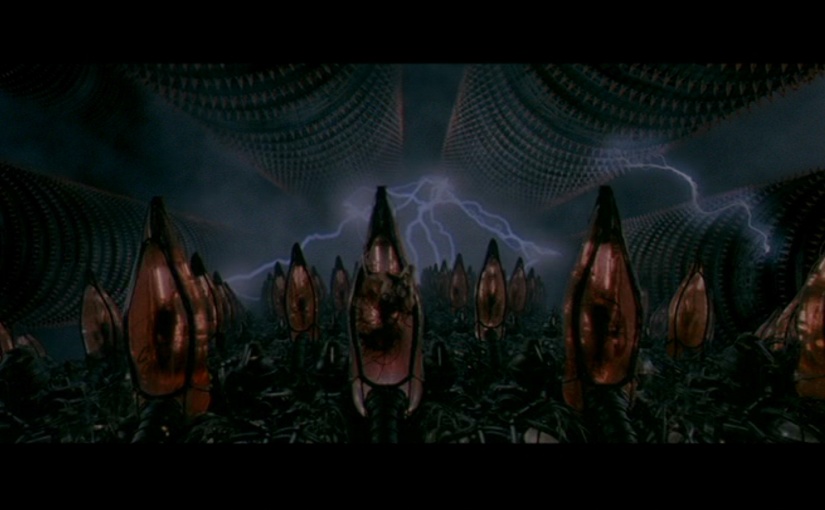 The second and third Matrix movies are such colossally boring letdowns. I could write until my hands fell off about why my obsessive fandom blew up in my face. A friend accused me recently of hating the sequels because it’s the “in” thing to do. Not so: when the sequels were announced, I visited The Matrix‘s website every day to learn more. I was in art school at the time, so I obsessively sketched every single character as they were released. I listened to the soundtrack whenever I was doing anything related to art, and watched The Animatrix so many times before the second movie came out that I got sick of The Animatrix. I even read a crappy book about philosophy and The Matrix. I forgave the second movie for it’s crappiness, thinking it was just the stepping stone to a profound conclusion. Perhaps if the third came out the day after, I would have been satiated as I so desperately wanted to. Instead, every day that lapsed between releases, my excitement and hope halved.

I’m not here to grade these in terms of good or bad movies, but I love the message the siblings are trying to communicate so much, that if I were anyone important to them, I would have begged them to make a single sequel, cut out all the crap about characters that you so desperately want us to care about but who are too boring to care about. Separate Neo from the group more quickly, but make his journey focus on weird existential stuff (“cool fights” has a definite point of diminishing returns), and make Morpheus and Trinity the focus of the meat-on-the-ground resistance. Ugh. Also, that Neo-Trinity spit string during the least-sexy sex scene of all time? The theater groaned, loudly, ten years ago when I saw it.

The gnosticism has a dual climax in these two movies: in the first we get to meet the Demiurge, the program that goes by the name, “The Architect.” It’s a perfect fit. He is literally the program that is so blinded by his own conception of the universe that he cannot accept alternatives outside of the cycle of rebellion and extinction that he’s become accustomed to. The second and third movies are bogged down by so much faux-losophy about making choices using such elevated language that, even if anyone were saying anything, there’s no biological way a genetically identifiable human could care.

The second climax is when Neo faces down the chief Archon, Agent Smith, policing gone rampant. The fight scene goes on for so long that I shoved a fork in my eye in order to distract me from the tedium (my third fork, following the car chase, and the storming of Zion) before Neo realizes, again, that violence can’t solve this problem. He allows Smith to absorb him into the collective, but it backfires. Everyone de-Smith-ifies and becomes (assumedly for this decision to make any goddamn difference) slightly en-Neo’d. The moment of his death even recalls Christ’s removal from the cross as Deus Ex Machina disconnects him from The Matrix. The metaphor sticks hard: through the sacrifice of a single person, every person connected to the material world (or The Matrix, as it were) now has at least the opportunity to experience his level of freedom, whether or not it gets taken.

The Hinduism. The dry as chalk dust dialogue that the Wachowskis tried to play off as profound is, I think, an attempt at Hindu and/or Buddhism detached benevolence. There’s no reason to raise to raise your voice, so you don’t raise your voice. There’s also the multiplicity of deity (sometimes literally, a la Smith and the robot baby head at the very end whom the subtitles refer to as Deus Ex Machina), which is a common feature of Hinduism: proliferation of forms accompanies enlightenment and deity. Brahma gets between four and infinity heads, and Vishnu, Durga, and Kali all get multiple sets of arms. There are uncountable Smiths by the end of his two film rampage, and Deus Ex Machina communicates through an innumerable swarm of smaller robots. Neo also wears a nehru jacket (the fucking coolest) throughout the movie indicating that he’s not just the Kristos, but also possibly the a Bodhisattva – a Buddha that forgoes his own ascension to Nirvana in deference to helping others attain enlightenment.

I feel like if the movies were just the two paragraphs I described, they would have been an incredible modern parable for transcendence encoding multiple world belief systems. Instead we get ghosts that amount to nothing, forty minute car chases and city invasions that have our hero thousands of miles away (he walks out the door of a Tibetan monastery and then desperately flies to get to the car chase), and it makes us think what good he is. I’m not sure who messed up, but I feel like there was a serious missed opportunity for transcendent sci-fi.

If you’re reading this, and want to watch along, I’m doing Matrix-esque movies next. I only have three (unless someone suggests something), and they are: Dark City, Cypher, and Thirteenth Floor.

2 thoughts on “A Science Fictional Year: The Matrix Anthology”