The mythical A+: Classic comic book material. Belongs next to your copy of The Notebook and The Joy of Cooking.

A: Would definitely recommend to all comic book readers. Even more so to fans of the genre or characters

B: Enjoyable read. Fans of the genre or characters will especially like.

C: Non-essential read. Can be enjoyable for fans of the genre or characters, but likely for only one or two events in the books.

D: Unenjoyable book. Read at your own risk. Might find satisfaction if major flaws are overlooked.

F: Please don’t buy this book. Donate your money to a local comic book writer’s workshop instead to inspire future generations to write something better than this trash.

Pick of the Week:

The second issue in this mini series is definitely much better as far as story goes, and the artwork in this issue is great as well. We see the Turtles travel forward in time from their last destination but it is still the past to them. This time they are in Japan and almost immediately after they get there and get clothes they help out a familiar man as he is getting attacked. We still don’t know much about Renet who is the cause of the time travel until later in this series or we may have to wait for the TMNT Annual coming out later this year where she is said to be introduced as a official character for the series.- Jacob

The end of Zero Year is finally here. The showdown with Edward Nygma comes to a close, and one of the best Batman stories of all time is over. The finale is every bit the culmination it was supposed to be, as Batman and Nygma engage in mental warfare, the fate of the city in Batman’s hands. The arrogance of Nygma is perfectly in sync with The Riddler mythos and it makes him a character that you love to hate. The main story is great, highlighted by some great panels that will define the arc, but the real prize are the subtle callbacks to minor Batman details. These range from past Zero Year issues to new aspects of Batman’s past, to the appearance of a newly-designed (and sexy) love interest of Batman’s past. When the debris clears, there’s no denying that Zero Year‘s decision to tackle uncharted territory pays off in a big way. – Sherif

Although Robin Rises didn’t give us the result I wanted, it led to a much more epic journey. The “new” Robin is going to be Damian, and if the picture I’ve seen floating around the internet are any indication, Damian will be returning, but as a reanimated corpse. The issue even pokes fun at the ridiculousness of what is soon to come. As Batman fights the League when they try to stop him from going to Apokolips to recapture Robin’s body. To do so, writer Peter Tomasi reveals the Hellbat armor, which already deserve a spot on our Top Batsuits list. With the League not allowing him to go, what do you think he’s going to do? Whatever the hell he wants. I’m all in on this epic tale. – Sherif

Batman has been hogging up much of the New52 spotlight, so it’s about due time that some of the biggest names in comic books saved the book. Writer Geoff Johns and John Romita Jr. have instant chemistry, and this new hero (?) is an instantly appealing character, and the mystery surrounding him drives the story without dragging on at all. The major issue I have with the tory so far is that there is a LOT of dialogue. The first few pages are almost half-way filled with words, which was hard to get through when there was no momentum to warrant such long story-telling. The use of the medium succeeds with good art and word chemistry, not pages of talking heads. It doesn’t last forever though; once the book progresses to show our new guest, we get an enthralling story that I look forward to reading again. – Sherif

By now, word of Wonder Woman‘s new creative team has swept the internet. After this one, we only get two more issues of the amazing Brian Azzarello and Cliff Chiang before the reins are handed off to the Finchs. Until then, we get to live out the rest of this bittersweet journey knowing that it will be over soon. First born has captured Wonder Woman and has begun his assault on Themyscira. We have all the tellings of a good war tale, but this issue plays out kind of like a bad The Walking Dead issue, with not much development throughout the issue, and one cliff-hanger at the end. In the grand scheme of the finale, this was just collateral damage – the issue isn’t unenjoyable. – Sherif

This issue reminds me so much of classic X-Files, I felt like I was watching the show. Again, with a lot of these TV to comic adaptations, I get a bit frustrated that I am reading a comic instead of watching these stories.  However, this was a good moment for this series as it really connected to me as a fan with the writing and the art. Seeing Skinner, Krychek, Mulder, Scully, and the Cigarette Smoking Man all active and all involved in some huge conspiracy was amazing.  I am sure it will all tie into a lot of the big events from the TV series.  They have made references to a ton of cases and things that may come into play at some point. Although a lot has happened up to this point in the series, you should definitely try and pick this up if you are just getting started in the series or if you were a big fan of the show.-Jacob

This event at IDW has the child inside me having a brain aneurism because of over-excitement. This issue focuses on one of the robots from the previous Super Secret Crisis War #1 who invades Aron City, the home of Johnny Bravo, who is the famous Elvis looking and sounding, Zapp Branigann type of guy from his own cartoon. Johnny’s mom is missing and other various characters from the show, but ultimately it was a good story for the character development of Mr. Bravo and shows why he was not chosen as one of the main heroes kidnapped by Aku. If you have ever watched the Cartoon Network classics this is a must have, but since it is just a one shot, I am sure not getting it won’t effect you understanding of the main story. -Jacob

As much as I enjoy this book, it’s actually painful to watch Marko and Alana continue to drive a wedge between themselves. Alana is busy at work, but has taken on way more than a bigger role – she is on her way to becoming a drug addict. Meanwhile, Marko is rubbing elbows with a fellow stay-at-home parent and they seem to be getting uncomfortably close. There’s also the signature sex scene, which promptly follows the signature murder scene. I love the crazy robot janitor. His character is causing going to put a huge hole in everybody’s plan, and with no motive or backstory to understand what he is doing, he is even more frightening to watch. Saga remains my favorite book from Image, so to say that this issue didn’t strike me as amazing is still saying it’s one of the best books out. – Sherif

This monthly series of Deadpool is kicking the pants off of the Dracula’s Gauntlet weekly series and the main series at the moment! This issue has some pretty good writing and it is wonderful seeing Cable and Deadpool get to know each other during Civil War times. This series has definitely been enjoyable and has been a good break in the overdone and often story lacking series Deadpool has been involved in this year. – Jacob

Storm #1 – B-
This week, Marvel debuted its latest solo X-Men character, with Storm.  To give you some background on my love affair with Ororo, when I was a child and all the other little girls were putting toilet paper on their heads to make a veil for Kindergarten weddings, I was using toilet paper to create tornadoes, and then I would control them while I was in the sky, a.k.a. the top of the stairs, and scream “I am STORM!”.  With that being said,  I was a little disappointed in this issue.  The story gave some background into Storm, her capabilities, and where she is now.  However, there was no background for the island she saves or the young defiant mutant who Storm takes back home to Mexico.  I never felt connected with any character, including Storm or Beast.  My predetermined bias forced me to give a high score on this book, but I won’t knock it until there has been more content. – Adrian

This miniseries and by connection the main series of Original Sin are about to come to a close. In this second to last issue of Original Sins we get to see stories about Doctor Doom, a overweight man playing Captain America in a parade ad of course the Young Avengers Story that has come with each issue. This series has been odd and I tend to be most excited for the stories that last two pages, which is usually something like Howard the Duck (whom I love). It was nice to at least kind of see what Doctor Doom is up to during Original Sin, but ultimately his story was about just some random loser who saw Doctor Dooms secrets. Overall this is definitely not a must have comic even for an Original Sin story line. -Jacob

We see the final battle between Blade and Deadpool and more story behind how Deadpool and Shiklah fell in love and got married. But although some of that may sound entertaining the way they dispatch of Blade is a very “No duh!” moment and the rest of the story just seems like it is a very unneeded prequel to Deadpool’s wedding and, of course, extra stuff to add to the whole Deadpool Gauntlet story.  I will continue to read this series as I always find Deadpool entertaining, but maybe the constant barrage of stories for him has made him a predictable and boring character when not written in the right way. -Jacob 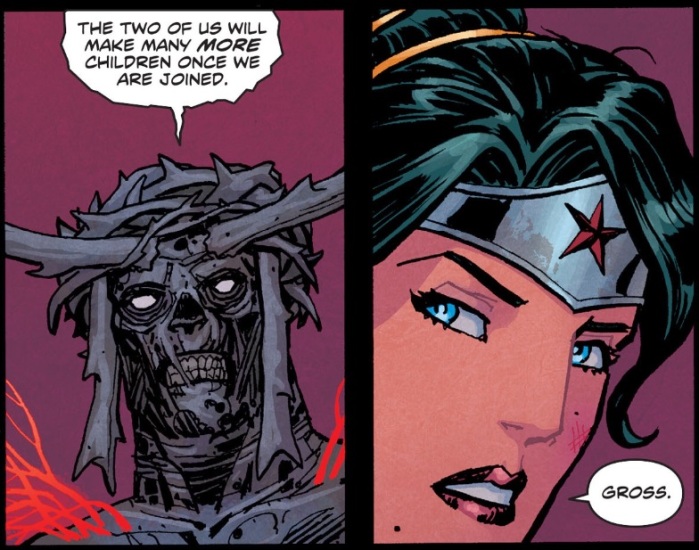 Panel with the Most Awesomeness: That about wraps it up for our reviews this week! Look for next week’s previews coming soon. Any comic books you didn’t see reviewed that you want reviewed? Any grades you didn’t agree on? Let us know in the comments!

All images taken from ComiXology app and the credit for them goes to the respective publishers; thanks to IDW Comics, image Comics, Dark Horse, Boom! Studios, Dynamite Entertainment, DC and Marvel for putting out great books.