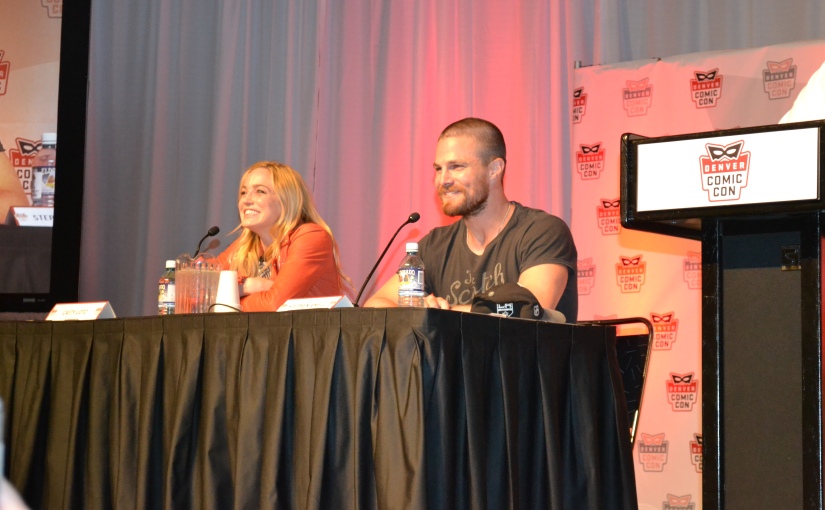 Topic: Q&A with the stars of The CW’s Arrow

We arrived a few minutes late due to the overlap of the Batman 75th anniversary panel, but were pleasantly surprised to find the place filled to the brim with people. This is selfish of me but the more fans of this show there are, the longer it will be on air. I am hoping for a strong ten years like we got out of Smallville and I wish the same for the upcoming Flash show. By the time we arrived, the moderator had started a few questions of his own and I made it just in time for the audience to start asking questions. On a very basic level, I learned that these two people are totally awesome and in a different life, Stephen and I might have been best friends. 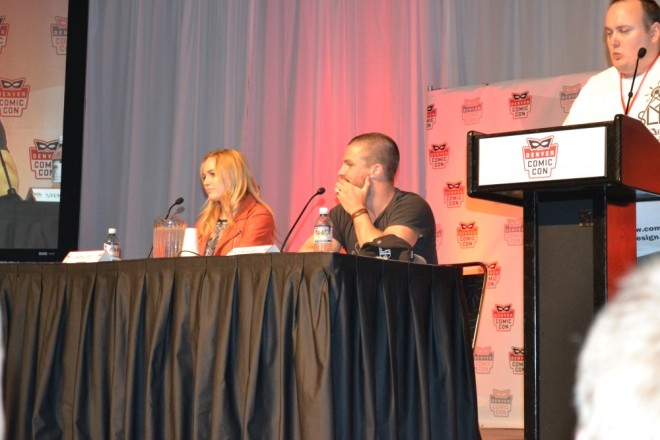 There were tons of questions about the show, which is great, but I am surprised that there weren’t any questions asked about his time on Hung or any of the other popular shows he was on. There was no way that I was going to get a question answered because the line to ask questions was almost out the door on both sides of the room. We did learn that DC is very open to allowing them to use name and places from the universe and that will be a pretty big deal going further into the show. Stephen also divulged that he prefers a recurve bow to a compound, as he considers compounds to be cheating, and that he preferred the pain on his face to the mask he currently wears. The panel was filled with fan questions like these, and while I could fill up a page alone with the answers to these questions, I would tell you to check out the YouTube video that Stephen posted on his Facebook account. 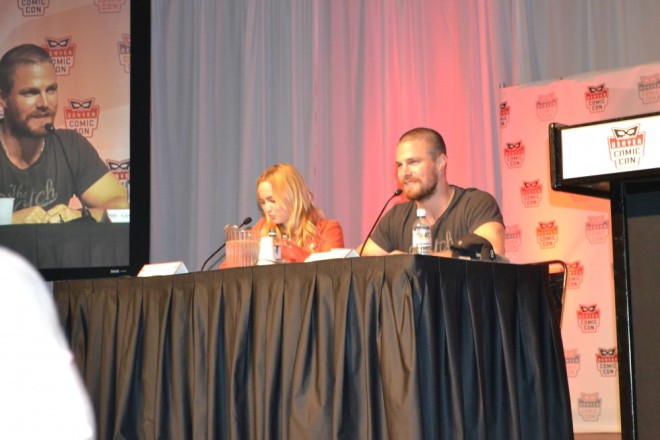 I didn’t get the opportunity to ask a question of either of them during the panel, after a combined wait time of an hour and a half, I was able to get the autograph of both actors and ask each a question or two. I can confirm that they are both genuinely nice people and are truly appreciative of their fans, which made talking to them all the more awesome. Caity all but confirms, quite coyly I might add, that we haven’t seen the last of Black Canary and Stephen assures us that SPOILER!! we haven’t seen the last of Oliver’s child that Moira pushed away. I can’t wait to see if they bring in Connor Hawke next season and I think this was a question that generally surprised Stephen so I don’t think he has been asked it yet. I also go the chance to ask Stephen about his charities and the video he did for BatKid. Check out the YouTube video for this and also take some time to look into the vineyards he has as well as the breast cancer charities he supports. Overall, this was an awesome experience and knowing that the actors of the show are such nice people, it will make watching next season that much better for me. I also hope that we see this version of the Arrow in the upcoming Justice League movie.

"The good thing about science is that it's true whether or not you believe in it." -Neil Degrasse Tyson A smooth sea never made a skillful sailor. View all posts by Robert Michael