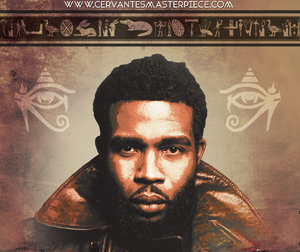 We just can’t stay away from this legendary MC; who knew Pharoahe was such a nerd? This week’s “Diggin’ Through the Crates” celebrates two occasions. First, Pharoahe is performing live in Denver tonight at Cervantes. If you’re in town, do yourself a favor and go see one of the illest MCs ever to rock the crowd, fresh off his P.T.S.D. album. He’s one of the best live performers I’ve ever seen, and VERY reasonably priced considering the level of talent and interaction you get at the show.

The other reason that Pharoahe graces “DTC” for the third time (“Agent Orange” and “Rapid Eye Movement” have come before it), is because of his acute knowledge of the X-Men. With Days of Future Past released today, we saw it fitting to pick a relevant lyric, but while there were some a couple Kitty Pryde lyrics and even more Wolverine ones, Pharoahe’s verbal portrait of the totalitarian rule in the X-Men’s future takes the cake. You know what? Scratch that, it takes the whole bakery; any MC that has rapped about destroying sentinels, let along read Days of Future Past (you can check out our spoiler-free review of the graphic novel here if you’re interested) deserves some recognition.

This track from the Jean Grae (who has made her “DTC” appearance with “Jeannie Rules“) mixtape Cookies or Comas features to artists just going in about how dangerous their flows are, likening their love to their apart MCs to various horror movie characters and other serial killers. It’s a track with of pop culture references aplenty, and isn’t just limited to X-Men shout outs. I could go on forever trying to dissect all the Easter Eggs in “Killin’ Em,” but we’ll stick to the mutant issue at hand (get it?).

Days of Future Past, for those that haven’t owned a television or browsed the web in the past four months or so, is a story about the desolate future, where the X-Men’s failure to stop a political murder has ended up causing the election of a radically anti-mutant senator who implements giant mutant eradicators that (surprise!) ends up killin’ everybody in site – much like the MC Lyte-sampled loop on the track suggests. Sentinels are a vital part to the X-Men lore, and represent the cold, heartless authority designed specifically to take you out. If this sounds like a social commentary, that’s because it’s supposed to be!

Let’s start with Pharoahe’s displeasure for the boys in blue. It’s no secret that Troy Jamerson isn’t impressed with the police and the American justice system. A point that Pharoahe tries to drive home is that young black men are a target in this society. The extended video for “Clap (One Day)” off his W.A.R. album illustrates the public shaming of police officers who shoot unarmed civilians, which is more common than anybody feels comfortable talking about. It might not look like it on the news, but the sentinels from Days of Future Past isn’t too far off of life in urban neighborhoods. The evidence is stacked high and people continue to ignore the dangers, and probably will until it endangers them, as well.

When Stan Lee and Jack Kirby first introduced sentinels in X-Men #14 almost fifty years ago, it was right in the heat of the Civil Rights Movement, when police were systematically trying to dismantle organized groups trying to fight for equality. Hell, the entire X-Men concept is based off the Civil Rights Movement and the right to equal treatment. Professor Charles Xavier and Magneto are often compared to the Martin Luther King Jr. and Malcolm X, respectively, of the mutant-filled world. There’s even the concept of “passing” as regular humans, something that some of the X-Men can choose to do, like light-skinned black people would do to avoid scrutiny.

Through the decades, X-Men became a sub-conscious platform for loving yourself and being comfortable with who you are, while still loving the people around you. Sure, there was Wolverine, who encapsulated all the rage and the desire to fight those who persecute, but there was the balance of Storm’s loving view towards all living things, and the logical thinking of Scott Summers (except when it came to Jean Grey; he was crazy about her). Without audiences even knowing it, the X-Men inspired the world to work as a diverse team to thwart injustice – in whatever form it may take.

One thought on “Diggin’ Through the Crates: Jean Grae and Pharoahe Monch “Killin’ Em””