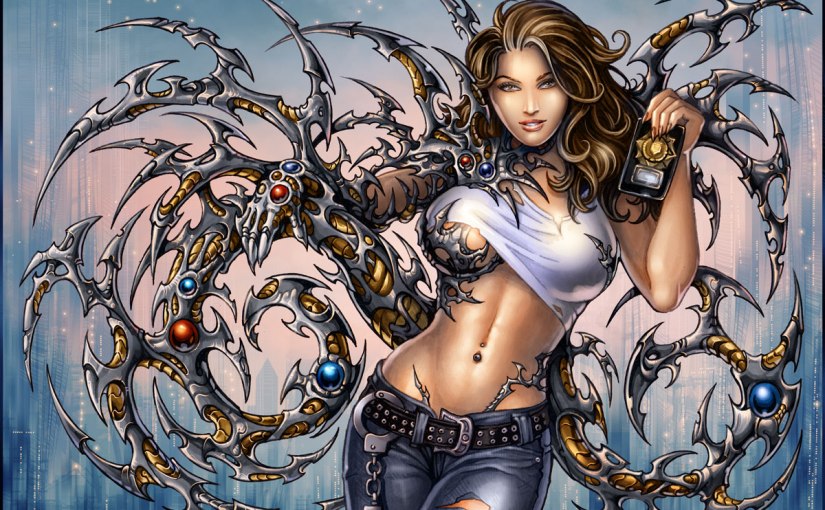 “We Can Do It!: Women in Comics, Television and Beyond” is Hush Comics’ answer to what women in comics mean to the world and to us  Visit our page every week to learn about a new super lady!

Sara herself is an esteemed homicide detective.  With the Witchblade, she can heal quickly, have armor, and can create any weapon needed to protect herself.

Debuting in 1995,  Witchblade is a comic book that tells the story of Sara Pezzini, New York City homicide detective.  When Sara and her partner, Michael Yee, are investigating a party thrown by villain Kenneth Irons, they are both mortally shot.  Sara tried to save her partner, and because of her heroic actions, was deemed worthy of the Witchblade, which then saved her from certain death.  What is the Witchblade you ask?  It is a gauntlet, or fancy magical glove, owned by baddy Kenneth Irons.  The Witchblade can only bond with a female host, and for our heroine, it bonds with Sara because she risked her life for her partner.  For the last 19 years, Witchblade has been apart of Sara Pezzini’s life, helping her in her career and her personal life.  She has fought against Irons and his bodyguard Ian Nottingham and many others.  In recent years, the Witchblade has been shared with another woman, Danielle Baptiste.  In 2001, Witchblade was made into an awesome TV series on TNT.  Unfortunately, it was short lived, but did a really great job of breathing life into the story.

Why is she important?:

Witchblade is important because she put a face, ahem, and a body, on the little guys.  No, not actual little people, but the independent comic companies.  Published by Top Cow, Witchblade is one of the most recognizable characters, particularly female characters, of the modern comic book age.  She just happens to be published independently.  Yes, Witchblade is so highly recognized because of her armor, or rather lack there of.  It would be obvious to say that Sara wears next to nothing.  There are plenty of comic covers, figures and statues to prove this.  However, she is much more than her sex appeal.  Sara Pezzini and her relic mean a lot to femininity in general.  The Witchblade only attaches to a woman.  While the Witchblade protects its host by providing unlimited weapons, armor and the ability to control elements, the woman who wears it must keep the balance between good and evil in the world.  How amazing is it that it is a woman who does this?

What she means to me:

I found out about Witchblade by watching the TV series with Yancy Butler back in the early 2000’s.  It was a pretty darn cool show.  It probably helped me wish that in my alternate life, I was a detective (this is in fact what my other job would be if I wasn’t such a wuss).  Sara is a tough cop.  She is good at her job, yet has a big heart.  In the series, she can still see the ghost of her deceased partner who helps guide her through her missions.  I also love that she doesn’t take any crap from anybody.  She was strong way before the Witchblade chose her, but it only enhanced her hard-hitting demeanor.  Any woman who is strong with or without her “power” is a woman worth looking up to. 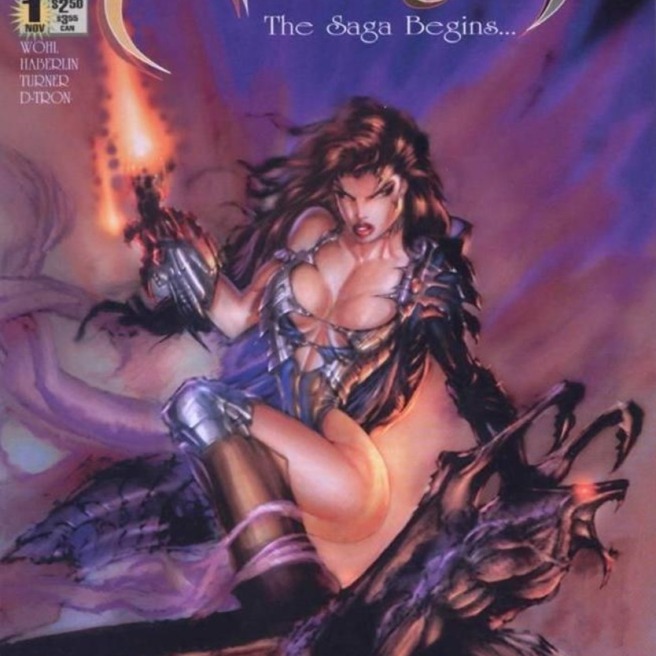 Witchblade in her armor…. oh. my

Sara Pezzini.. in her street clothes.