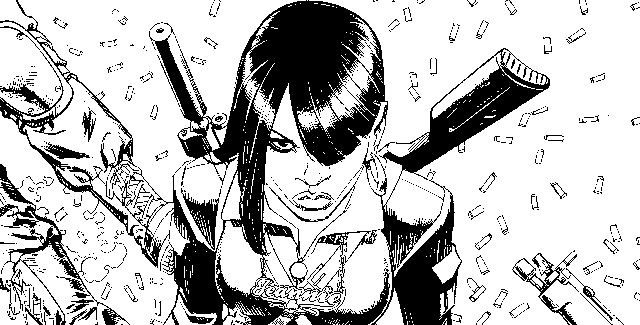 Lyric: “Fast and agile/Teleport rhymes, Nightcrawler while you’re fragile/Stagnant ballers/Don’t give a damn about your dollars.”

Today is somewhat of a special day for “DTC” as we introduce our first female artist to the stage, Jean Grae. What better person to represent our music/comic cross over than a hard hitting hip-hop artist who happens to share the same name as a strong and brilliant female comic book character (check out our profile on Jean Grey here). It is truly an honor to feature the underground legend Jean Grae, who truly proves her worth and nerdiness right off the bat with her name, and this sick lyric. It’s one thing to mention the X-Men in your lyrics, but to mention fanboy favorites like Nightcrawler and have it be as awesome as this. Basically, what Jean Grae is BAMFing about is that her rhymes are simply better and that’s all there is to it. With the wonder that Kurt Wagner travels through space is the same wonder her rhymes inflict on her listeners – which is actually as close to the truth as you can get without being Nightcrawler.

While a lot of artists think they are making moves and putting out work, they are moving in stasis compared to what Jean Grae spits. While they stand still, counting whatever their pocket-change produces, Jean Grae isn’t worried about them at all. For all she cares, you could be swimming in loot, but that doesn’t mean your rhymes are worth a dime. She might as well be Nightcrawler, the way she’s making moves from one venture to another. On top of rapping, Grae recently made her directorial debut creating “Life With Jeannie.” This half-hour sitcom is written, directed by and stars Jean Grae which dropped on JeanGraeTV.com. She also created her own company “KAGD.” In one of her most recent music ventures, Jean Grae released three cycles of “Gotham Down.” How nerdy is that. She is also a self-proclaimed X-Men and John Byrne, who wrote Days of Future Past (the movie adaptation comes out next month).

Along the lines of making movies, Marvel is finally making some big moves with our teleporting superhero, Nightcrawler. Nightcrawler is finally getting his first solo series. I won’t spoil anything for the people out there who aren’t up to date with out hero, but this is truly Kurt Wagner’s second chance at life. Back in 2010, Nightcrawler gave his life for a noble cause in X-Force #26 (April 2010). But, when Amazing X-Men launched last November, we saw our hero return. And now on 4/9/14 we finally get to see him with his first solo series. With artist Todd Nauck and writer Chris Claremont (who has worked with the character from 1975 to 1991) at the head of this project, we can hope and expect to see some good things out of this comic series. I’m getting blue in the face just thinking about it, ha, get it?  This comic hit shelves this Wednesday, 4/9/14, and we encourage you to go check it out. We also encourage everyone out there to check out Jean Grae and her latest endeavors. If you want more information about Jean Grae, and her works you can visit her website at http://www.jeangrae.com/.

One thought on “Diggin’ Through the Crates: Jean Grae “Jeannie Rules””