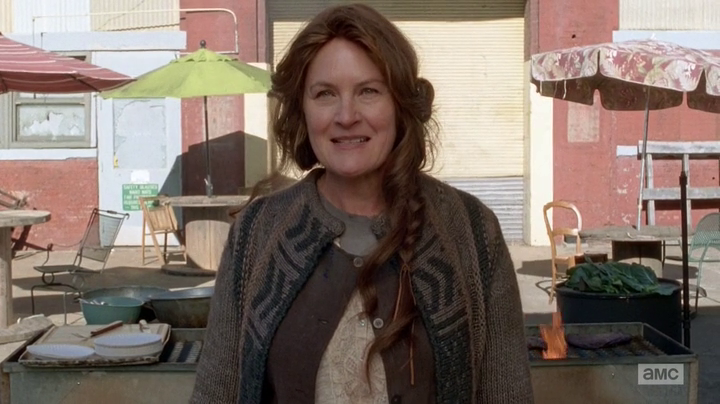 Eugene leads into this episode entitled “US” with a great quotable. “That there is a video game worth the pre-order.” Those of us that pre-ordered The Walking Dead: Survival Instinct can disagree. We find Abraham, Tara, Eugene,  Rosita, and Glenn on the road. Abraham is focused on completing his mission to get Eugene to Washington. Glenn is focused solely on finding Maggie. Once he finds her note on a TERMINUS sign, he takes off running.

Daryl is still trying to fit in with Joe’s band of roughnecks. He is a wolf amongst a pack of dogs. After tracking a rabbit  for an entire morning, Len shoots the cottontail before Daryl and claims it as his own. The dispute quickly escalates as Len antagonizes Daryl about losing Beth. Joe intermediates the dispute and lays out the law of the group before Daryl has an opportunity to plunge his knife into Len’s chest.  “I laid out some rules to keep things from going Darwin every couple of hours.” Who knew that rednecks had such a large vocabulary? Just a quick comic book reference, there is one other guy who loves rules, and his name is Negan. However, Joe is definitely no Negan; he likely just represents the need for humans to keep rules to avoid plunging into mass chaos. 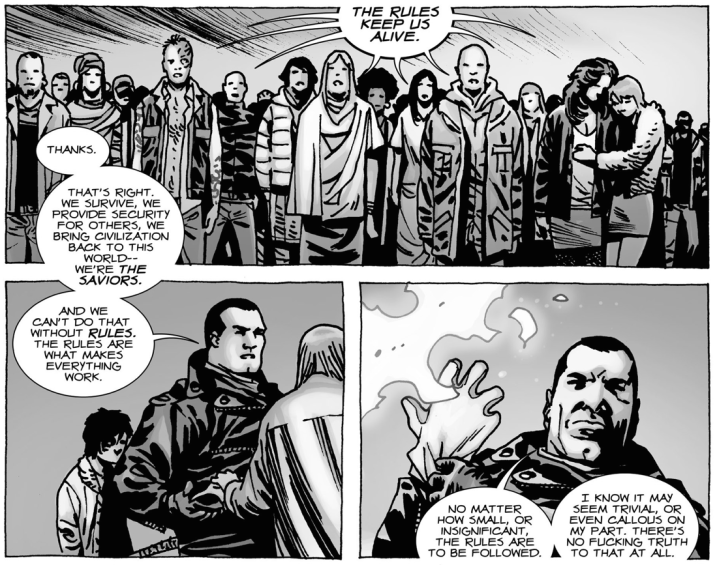 Carl and Michonne are bonding by walking the train tracks Stand By Me style. They share a tender moment after Michonne loses a bet, and gives Carl one of the few candy bars she has left.  Our band of Walker killers seems to force the kumbayah feel a little, but we are see them begin to normalize after the trauma of losing everyone at the prison. The whole scene with Rick, Carl and Michonne feels like a cheap novelty. After missing them in the previous three episodes, it really sucked to see our main protagonist as nothing more than a plot piece. 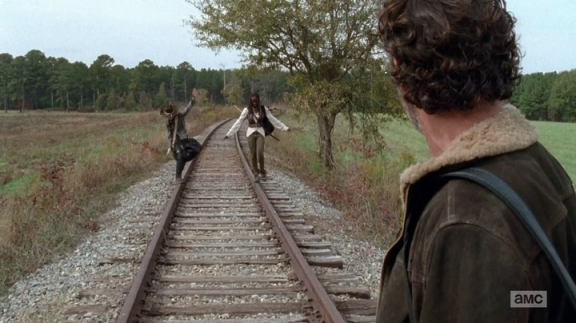 Abraham has the one-liner of the entire show, “I don’t give a monkey’s left nut!” To persuade Abraham to keep going, Glenn offers to give Eugene the riot gear in exchange for their help; let me just say that Glenn + riot gear = badass, but Eugene + riot gear = fifty more pounds of dumbass. Abraham’s group decides to split from Glenn and Tara when they come to a railroad tunnel that is infested with walkers. Glenn will stop at nothing to save Maggie, so he ventures in with Tara. Tara confesses her part in storming the prison to Glenn. Glenn has already forgiven her and is ready to move past what happened with The Governor. 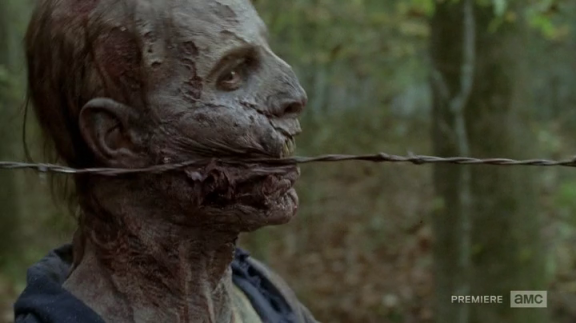 Len is clearly over-compensating for the size of his bow. After setting up camp in a garage, Joe’s group lays claim to cars and goods, Daryl, in an act of defiance doesn’t lay claim to anything. Len accuses Daryl of stealing from him, when confronted he is outed as a liar and pays Joe’s price. He is beaten to death. Daryl sheds no tears and the group hits the road again.

While Rosita is driving, Eugene decides to trick her into doubling back for Glenn. When they reach the other side of the tunnel they are met with a big surprise. Glenn and Tara find themselves stuck between rocks filled with Walkers, and a hard place. When facing this wall of Walkers trapped beneath the fallen tunnel, Tara gets her leg caught underneath rubble and Glenn refuses to leave her. Regardless of the circumstances he won’t compromise his morality; he is no Shane. Walkers swarm the two of them, and the situation looks hopeless when, “Blam, Blam, Blam,” Maggie to the rescue, along with Sasha, Bob, Abraham, Eugene and Rosita. They make short work of the Walkers and we get the reunion we have all been waiting for.  Glenn quickly makes up a story about finding Tara on the road to protect her from Maggie. If Maggie knew that she was partly responsible for Herschel’s beheading, there may be more than a “Call Tyrone” domestic dispute. 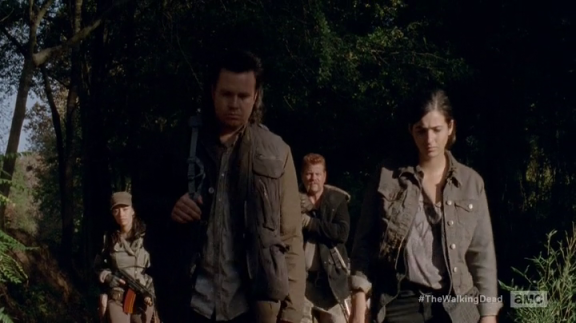 At the end of the episode we find out that Joe’s group is tracking Rick because of the encounter at the house in “Claimed,” where Tony (the Chuck D lookin’ guy) spots Rick. We are unsure if Daryl knows this, but there are enough clues to assume so. Is Daryl using Joe’s group to find his lost friend’s?

Maggie and Glenn’s group combine forces and decide to trek forward to TERMINUS. The name TERMINUS is derived from the Western and Atlantic Railroad  through Georgia in1836. The area was named as the end point to the railroad. It was renamed, Atlanta, in 1847.  Our survivors arrive at the “sanctuary” and find a hippie commune. The gates are not locked, there are flowers growing everywhere, and oh snap! Is that Star Trek The Next Generation’s Tasha Yar? I mean, is that Denise Crosby? Things can only get weird from here on. TERMINUS has to be a trap. It seems too good to be true. 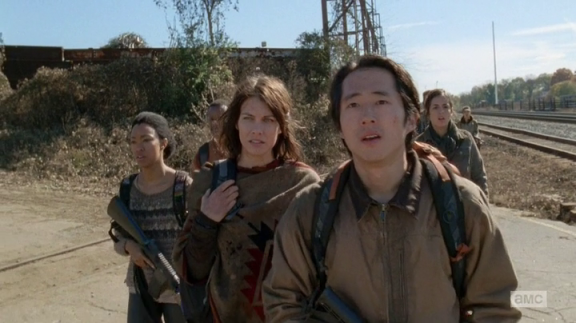 Hush Comics gives “Us” a C for it’s lackluster… everything. The groups coming together for some reason or another in Terminus, but everything leading up to that point felt forced, illogical and uncharacteristic. Sure, there’s certain lesbian tension between Rosita and Tara, and yeah, there are a lot of skeletons that need to come out of the closet, not to mention Glenn and Maggie’s heart-felt reunion. As disappointed as we were, the ends kind of justify the means here. The Season 4 finale is gonna end on a crazy note. We predict that Daryl will have to kill Tony to protect Rick. Maybe Terminus really is the safe haven it claims to be and the war they bring to the doorstep puts them all in deep doo doo. Maybe Beth will show up on a dinner plate, where Terminus is full of cannibals. We do know there’s no gray area here as the Survivors reach the literal “end of the road.”

All media credited to AMC Television and Image Comics