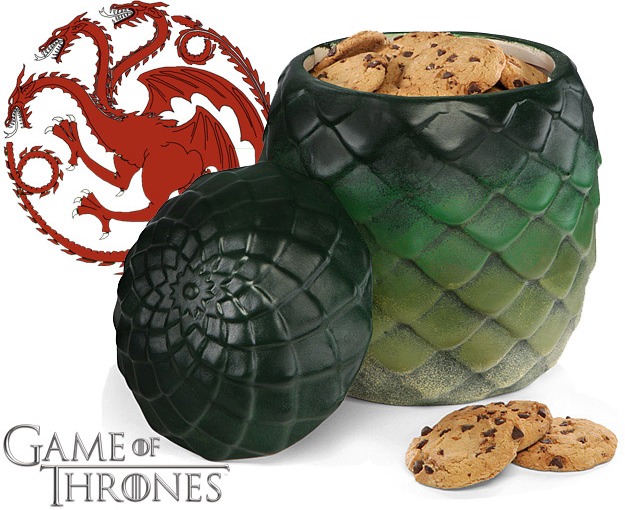 What it is: Holy Mother of Dragons, Batman! HBO and Game of Thrones have released a cookie jar based of the design of one of Khaleesi’s dragon eggs. Rhaegal (the dragon that hatches from the green egg; there are also Viserion and Drogon who hatch from other-colored eggs) may be growing up and are causing a ruckus throughout the Seven Kingdoms, but Thronies like myself remember when they were precious cargo, thought to never hatch. The eggs themselves are beautifully painted and definitely looks like a dragon egg is supposed to. Plus, they hold cookies

How Much it Costs: This ceramic piece of destiny will run you $30. You can find it all over: from Amazon to ThinkGeek to the HBO Store. I’m not sure how long they’ll be available, as collectibles like this aren’t as hot of a commodity, but tend to disappear to the barren wastelands of eBay, where people love to upcharge collectibles like this for 200-300% of the original price.

Is It Worth It?: At $30, this dragon egg is considerably less than the cost of raising an army to challenge the Iron Throne, but more than the monthly cost of subscribing to HBO to watch GoT. When you look at buying an actual cookie jar, $30 sounds down-right expensive. I mean, it’s an item that is likely to sit around and collect crumbs for years. However, this is no ordinary cookie jar; this is Daenerys Targaryen’s dragon egg we’re talking about here. Friends will envy you and enemies will fear you with this cookie jar at your side!

Bottom Line: If eating cookies and watching Game of Thrones is your thing, this is for you. It might clutter up the kitchen, but it could add some flavor to your home, especially if you are a GoT enthusiast. This is the kind of things Birthday gifts were made of, easily justifiable for a friend, but hard to justify to spend on yourself. However you plan on eating your baked goods, join Game of Thrones for the Season 4 premiere, airing on April 6, 2014.