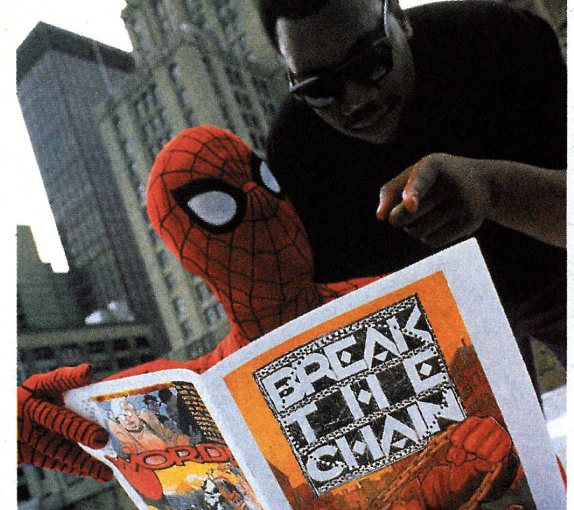 Lyric: “The streets won’t forgive you man, them guns go BLAM/ Have you crawlin up the wall like Spider-Man… But no, you ain’t made for this/I put my hand through your chest like Agent Smith.”

If you are even going to begin a conversation about pioneers of the Hip-Hop world, KRS-One (Knowledge Reigns Supreme) A.K.A “The conscience of Hip-Hop” A.K.A “The spokesperson for Hip-Hop” better be one of the tops of conversation. KRS-One has been deemed these nicknames by Rolling Stone, The Source and even the Wall Street Journal and the Zulu Nation. With Black History Month coming to an end, it only seemed right to have KRS-One bless “DTC.” Later on, I will speak more on how comic books and being nerdy could possibly relate to someone like KRS-One, but for now I want to take some time to focus on KRS-One – a Hip Hop god.

Above many other KRS was one of the notable Hip Hop heads in the community that used his power of music and reach to make positive progression for black culture. In 1988-89 KRS-One started the “Stop the Violence Movement” in response to the continuing violence heard throughout hip hop music and the black community. Collaborating with some of the biggest stars out of the East Coast Hip-Hop scene, KRS-One release a song called “Self Destruction,” with all the proceeds going toward the National Urban League.

KRS-One has always tried to spread positive messages to the black community, with songs such as “Sound of da Police,” which speaks on how the police treat people of color, and how their power is often abused and unjust. Another positive song that helps deem KRS-One a king of Hip-Hop is “Hip-Hop Vs. Rap.” KRS-One states in this song, “Rap is something you do, Hip Hop is something you live.” You know what else he said in “Hip Hop Vs. Rap”? He said, “When these suckers don’t respect it, check it/ FLAME ON, I know the light is bright but keep on watching me.” Um, excuse me, Mr. One, but your nerdy side is beginning to show.

Beyond rap music, Hip-Hop is a way of life that the black community truly has adopted and made their own. This goes deep down into his bones, seeing that he is the founder of the Temple of Hip Hop. The Temple of Hip Hop is a: ministry, archive, school, and society (M.A.S.S.). The goal is to encourage artists and radio stations to write, and play more socially conscious music, and also to maintain and promote Hip-Hop culture, KRS-One believes that Hip-Hop is more than music, break dancing and graffiti, but rather it is a political movement, a religion, and a culture. This has gotten the United Nation to recognize Hip Hop, as a full-fledged religion. What? Hip-Hop as a religion? YES, if you do not have faith, then I encourage you to pick up at your local book store, The Gospel of Hip Hop: The First Instrument, which has been referred to as the “Hip-Hop Bible.”

I know this is all fine and dandy but I haven’t really tied in comic books at all yet, well hold on to your Underoos because coming your way is some comic related info. When KRS-One was just a 6 year-old Lawrence Parker (1971), he started collecting both comic books and toys in Harlem New York, right around the time he starts to become interested in history, religion and music.  In 1994, KRS-One and Marshall Chess combined both literature and music to inspire urban youth. This combination turned out to be a comic book accompanied by an audio cassette tape both entitled “Break the Chain” under the Marvel Comics imprint. This comic was meant to teach urban youth that they don’t have to be slaves to their past or their conditions, that we must break the chains of ignorance in order to become something positive in this world. With other name drops of comic references I believe that part of KRS-One’s heart still belongs to comics. Either way, without KRS-One hip hop would not be the inspirational movement that is has become today; so how could Hip-Hop be dead if KRS-One is still its savior? To find out more about KRS-One and the Temple of Hip Hop visit his website.

One thought on “Diggin’ Through the Crates: KRS-One “Nothing New””