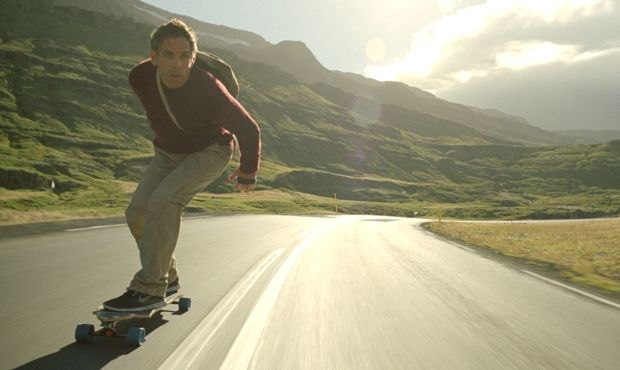 If you have ever thought about saving a three-legged chihuahua, fighting your boss in the streets over a Stretch Armstrong toy, or just wanted to quit your job and discover the meaning of your life, then you need to read this review, close your computer, and go see The Secret Life of Walter Mitty. Based on the short story by James Thurber and the film of the same name made in 1947, the new adaptation takes on new life and new meaning in this modern adaptation.

Directed by Ben Stiller, Walter Mitty is a fantastical, feel-good, adventure movie that steers away from cheesy.  Walter Mitty (Ben Stiller) is a man with a mundane life.  As is the case with all versions, Walter escapes a life where others nag him, put him down and trod upon him by daydreaming ways to make his situation go in his favor, but in the newest adaptations, Mitty takes his daydreams to new heights and makes them a reality.  (This is not to say the Danny Kaye version did not expound upon the short story, but seemed to be a little more slap-stick than introspective.)  Walter Mitty works for LIFE Magazine, which is going defunct.  When the most famous photographer’s (Sean Penn) negative meant for the last cover goes missing, Mitty decides to find the photographer and his negative.

Walter Mitty is multi-layered with the backdrop of a man who is too afraid to admit his crush on his co-worker Cheryl (Kirsten Wiig) who unknowingly becomes the catalyst for his adventures, real or not, the search for the photo negative, and the motto of LIFE Magazine itself, “To see the world, things dangerous to come to, to see behind walls, to draw closer, to find each other and to feel. That is the purpose of life.”  The motto is multi-layered in itself and encompasses so many feelings the movie allows viewers to experience through Mitty and ponder about oneself.  One piece of the storyline I loved is when Walter talks about his teen years and his leather jacket, mohawk, and sweet skateboarding skills, yet he ended up being a mild-mannered worker-bee who is generally overlooked.  Sometimes life passes us by that we become people who we never aimed to be.  But the thing about being an adult is that we can choose our own happiness; it’s just that we don’t always do this.  And as adventurous as Mitty becomes, jumping out of planes, offering clementine cake to warlords and escaping an erupting volcano in Iceland, life’s pleasures can and should be simpler than the technology and the fast paced life that inundates our everyday lives.  Sometimes, a soccer game with strangers is what’s more important.  And admitting what we want is even more important.

The special effects and cinematography blew me away for this type of movie.  The creative way of posting words throughout the film was well beyond expectation.  Text message break through mountains, the LIFE motto appears on signs, and the credits replace street sign postings.  Ben Stiller and Kristen Wiig are impeccable actors who make their characters relatable and Sean Penn’s character is admirably mystical, just as Sean Penn is.  He delivers one of the best lines of the movie, “Beautiful things don’t ask for attention,” which is overwhelmingly taking over Tumblr accounts everywhere. Walter Mitty delivers great humor, as well.  eHarmony Rep, Todd (Patton Oswalt), delivers some great lines.  The idea of online dating at all and how people portray themselves online is a great use of comedy.  And the music is in a realm of its own.  Featuring Of Monsters and Men and David Bowie, “Space Oddity” and Major Tom will never be the same after we see Kristen Wiig sing it with her guitar.  Check out this playlist to hear it, or consider buying the soundtrack itself.  The music added an amazing element to the film and completed how well rounded it really was.

The Secret Life of Walter Mitty has received mixed reviews from many critics, but I believe it is a solid film.  When a film can make me re-examine my life and how I live it, that is a top notch movie.  I laughed, I felt inspired, I was awed, and I fell in love.  That kind of Secret Life is the kind of life we should all strive for.

2 thoughts on “The Secret Life of Walter Mitty Review”