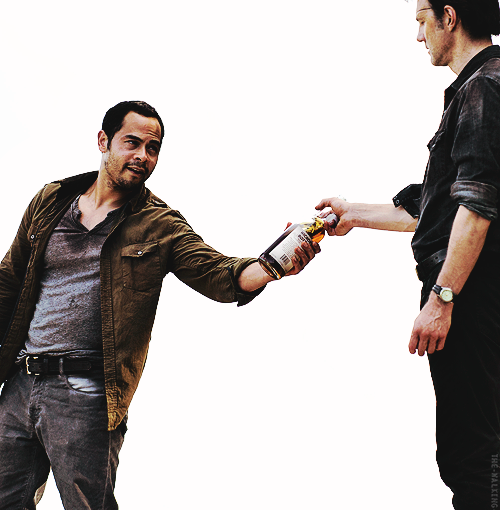 We open with chess pieces. The Governor is playing the strategy game with Megan again. They are in a new camp with a new group of survivors led by Martinez. Megan studies the board. Phillip Blake, still acting out the part of Brian Heriot, calls Megan “Pumpkin”.  We cut away to where “Live Bait” left off with Martinez pulling Brian and Megan out of the zombie pit. Martinez allows The Governor back to the camp with his brood, under several conditions, “One, I’m in charge. Two, no dead weight. That goes for everyone.”  The scene cuts back to the game. The Governor tells Megan that letting her win wouldn’t be winning – his daddy used to say so.  He also says that his daddy used to beat him in everything, including fisticuffs. Because of his tone, we are led to believe that Philip was an abused child.

We are introduced to a new crew of zombie killing roughnecks, Mitch, Pete, and Alisha. Alisha is  played by actress Juliana Harkavy of Graceland. Mitch is played by actor Kirk Acevedo, best known for his work on HBO’s OZ as Miguel Alvarez. Pete is played by Enver Gjokaj, known for his role as Victor on Joss Whedon’s Dollhouse series. It was exciting to see TV junkie fan favorites in this episode.  I tend to give a series more credibility with known actors, especially  if they come from The Wire! (Dear Tyresse and Bob, please come back into our lives.)  Our new group is scouting the woods with “Brian” in the opening scenes. Sidenote: there’s some history in the book The Rise of the Governor that explains this more thoroughly, but we think that he changes his name because Brian only has one I…. get it?? One EYE! The exchange between Martinez and Philip is tense. Martinez immediately catches on to The Governor’s identity theft scam and plays along. We cut back to The Governor and Megan. The frame widens and just behind Brian is an army tank. Fans of the comic appreciate its significance.  It remains to be seen whether or not that tank will be used to its full capacity.

This week’s episode of The Walking Dead is titled “Dead Weight.”   We find Philip and Lilly clearly in a relationship. Their interaction reminds us of his relationship with Andrea. He deceived both of them. We are made to feel sorry for these women. If only they knew! Brian’s new family of Tara, Megan, and Lilly is dependent on Martinez concealing Brian’s true identity, the diabolical sociopath known as The Governor.

Martinez, Mitch, Pete and Brian go on patrol in the woods, and Mitch clearly doesn’t respect The Governor. He throws a jab at him. “Hey one eye, what you doing?” Brian is focused. We come upon a beheaded body strapped to a tree. The word LIAR is written on a sign and nailed to its torso. Back at camp Tara and Alicia have a flirtatious exchange.  Grrh.  The group finds another body, this time the word RAPIST is nailed to its cadaver. These bodies have led Martinez, Brian, Pete and Mitch to a cabin. MURDERER is nailed to the last body on the porch. They enter the cabin cautiously.  They investigate and are attacked by biters. Brian shows his prowess by saving Pete’s life and reasserting his dominance. The scene is horrid. The severed heads of the bound corpses are rolling about on the cabin floor. We are given no explanation as to why, and it adds to the loss of humanity in this ghoulish nightmare.

Martinez is clearly in charge. He tells The Governor that  he wouldn’t have saved him from the pit if he had been alone. Martinez has lost complete respect for him. He isn’t The Governor’s subordinate anymore. Martinez has made a place for himself now.  The four men spend the night in the cabin. Mitch finds beer and The Governor gives an disapproving  look. One of the funniest lines of the season comes at this point, “I can never tell if he’s winkin’ or blinkin’.” Said in a Southern accent by the gruff Mitch makes for some of the best comedic timing and delivery in the show.  In a tender moment, Mitch reveals that he was an ice cream truck driver turned army tank operator. Pete was at Fort Benning before the turn.  Hooah.

We return back to the camp with the girls. The Governor doesn’t like the conversation between Martinez and Lilly. He is visibly upset when Martinez hints to their past community at Woodbury. Martinez and The Governor clearly are in a pissing match. They are both the alphas. At some point they will have to lock horns.

Martinez invites The Governor to his camper.  Drunken, he shoots golf balls from the roof of his RV into the zombie pits. He reveals that Shumpert is dead  and it was Martinez who ended up having to put the bullet in him. Martinez hits the ball into the great beyond, and tells The Governor to grab him another. My how the tables have turned! In my head, all I could think was “Who’s the bitch nooow?” Martinez suggests that they share the crown, and that’s when the fun begins! The Governor clubs him with a 5 iron. It was a swing Elin Nordegren would appreciate. The Governor kicks him over the side of the camper. Once down, he drags Martinez, like dead weight towards the biter pits as The Governor blubbers, “I don’t want it,” The biters pull Martinez into the pit. Martinez is a sacrifice, and the image is almost Christ-like. His arms are spread, as if some macabre stage dive at a concert. The hungry mass pulls him in.

The Governor is upset about murdering Martinez. Lilly tries to comfort him, not knowing what he has done. He is conflicted. Pete now wants to control the camp, but is met with discord by the other camp members.  Why on Earth would he want that shit job? One thing that we can rely on in this world is that with enough time, heroes and loose ends meet their maker. Most of the camp look like extras from Duck Dynasty anyway.  Pete seeks Brian for help. They find another camp while on patrol. The three of them, Brian, Pete and Mitch, contemplate robbing the camp. Mitch wants to, but Pete still has morals and shit, and is not prepared to make the hard decisions. The Governor watches and plots. They return back to camp.

The Governor wants to leave . He feels like it isn’t safe. He doesn’t think the interim regime will last. He convinces the girls to leave. Alicia tags along because she and Tara have started a serious relationship, like a day ago.  They leave camp in the night and don’t get far. The road is blocked by biters in quick sand. Stuck in the mud, gruesome and alone, The Governor stands in the car’s  high-beams looking back at the RV of scared women with the biters behind him stuck waist-deep all vying to eat him; the scene is like a comic book  panel or one of those lame “Choose Your Own Adventure” Goosebumps books. They have no choice but to turn back.

Back at camp, The Governor wastes no time and kills Pete by literally stabbing him in the back.  How poetic.  Brian puts on his leather jacket and embraces his true self. He has his Mojo back!  Except that he forgot to pop his collar.  Oh, well.  He immediately goes to Mitch, gun drawn.  He offers a smoke and an opportunity. The nerve! He kills the guy’s brother and then cons him into believing that it was necessary because Pete was weak. The Governor talks about his own brother, a weakling, his first mention in the series. Easter Eggs, galore!!! The Governor tells Mitch a story about stealing his dad’s cigarettes. He and his brother smoked the Lucky Strikes, a clear shout out to Mad Men and Don Draper; plus we see what seems to be a Fleetwood Bounder RV in this episode, a subtle nod to Breaking Bad and Walter White.  Awww, look at AMC sticking together. He tells Mitch, that he won’t need to worry about doing the right thing or wrong thing, because they will do The Only Thing. This implies that morality is Dead Weight in our world and has no place. The two coldly craft a story about Pete’s death. The Governor intentionally doesn’t crack Pete’s skull to keep him “alive” as a biter. He dumps his chained body into a nearby lake. As Pete is reanimated, we see The Governor, standing above his submerged body. He is staring into the water as Pete the Biter tries to reach out of the water for him, much like he did with his heads in the fish tank. Fans of the books know that Phillip did this to keep strong – to erase any fear or doubt. Pete serves the same purpose; he will undoubtedly be visiting him often. Pete has now literally become Dead Weight.

The Governor is running the show with a  leather jacket and a swag in his step. He gives orders and people willingly follow.  He once again proves his badassery after a Walker wanders into camp and attacks Megan. While the others are unaware of what to do, he blows its head off, with his shirt open, blowing in the wind. It was a defining moment for the camp. He proved that he is the right man in charge. He won’t hesitate when threatened and they can trust him. He is back. With a new confidence The Governor drives his truck out to the prison. He watches Rick and Carl, once again plotting. He walks the perimeter and sees Michonne with Herschel. He raises his gun and… 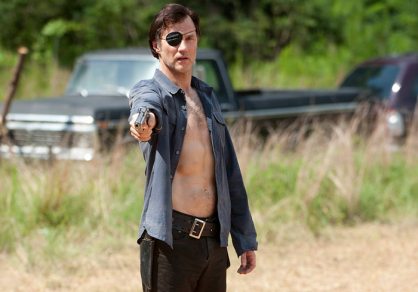 Hush Comics gives “Dead Weight” a B for its awesome yet predictable portrayal of The Governor’s fall back into crazy. The next episode is the mid season finale entitled “Too Far Gone,” a title shared with the trade paperback of The Walking Dead Volume 13 in the comic series! The comics are far evolved from this point in the storyline that the show parallels, so we’ll see if there’s any connection to it on the mid-season finale. It’s been a wild ride so far.  Come back next week for our recap and review!

All images credited to AMC Television