Thor: The Dark World opened with $85.7 million worldwide – not bad for Disney. Acquiring the rights to Marvel films has secured their studios rank among the movie franchise greats. Fanboys can breath a collective sigh of relief. Our nightmares of Professor X sing-a-longs with teacups and woodland creatures can finally be laid to rest. The integrity of our beloved comics has, for the most part, been maintained with only a few noticeable slights along the way, ahem, Iron Man 3.

The story is cliché and simplistic, so lets get that out of the way. There was a war, the bad guys tried to obtain a weapon that would defeat the good guys and when they lost, the weapon was buried deep where no one could find it until an unlikely character stumbled upon it and was consumed by its power. The bad guys searched for it and they found it and before they could wield its true power, then they were defeated again by a brave warrior. So in other words, Thor 2 is basically a 120 minute version of The Lord Of The Rings. It even has elves, but its lack of original script is forgiven, more so tolerated, by its incredible CGI and the always adorable Natalie Portman.

Carrying an entire movie on one name can be a stressful task. Disney was betting on riding Hemsworth’s pecs to a big payday, but the box office can be unforgiving if an A-Lister can’t deliver. Leading roles are becoming exceptionally dull. The overtly moral, one-dimensional character apparently bores writers like Christopher Yost of Dark World. Man of Steel is a perfect example. I can hardly remember Henry Cavill even being in the movie, but Michael Shannon made me a life-long fan with his portrayal of General Zod (“I WILL FIND HIM!”). The list goes on: Kevin Bacon owned First Class, Alfred Molina in Spiderman 2, and we are all aware of Ledger’s glorious performance in The Dark Knight. With that being said, “I am Loki of Asgard, and I am burdened with glorious purpose!” Thor 2 can attribute its success to its villain, played by Tom Hiddleston.

As a prisoner of Asgard he kept our attention, pacing his cell like a lion at the San Diego Zoo. His facial expressions read as predatory. Loki is a thinker. He is planning 3 moves ahead of the game. He took us by storm in Avengers. He stole every scene and was just as entertaining as Downing, if not more. He clearly has mastered the art of delivery, placing a breath where it is needed before a line for dramatic effect. It was such a relief to see an actor jump so effortlessly into a role. He is most definitely the best written character as well. Delivering beautiful rebuttal lines like:

Thor: I wish I could trust you.
Loki: Trust my rage.

In one scene he stabs Thor in a ruse to fool the Dark Elves. It was so well done that even the audience was fooled and we once again had a reason to hate and love his character.

The remaining cast does not disappoint. Idris Elba had my favorite scene as Heimdall, guardian of Bifrost, the rainbow bridge. At one point, he jumped from the bridge onto one of the Dark Elves warships in an attempt to thwart their invasion. He is a one man army. Plus his armor is sick! The always sarcastic Kat Dennings delivers a wonderfully dry comic relief role as Darcy Lewis, proving that Zooey Deschanel doesn’t have the market cornered for brunette hipsters. Rene Russo has clearly aged. No longer the MILF of the Thomas Crown days, she plays a great sentinel of Asgard wielding a sword to protect Jane Foster, played by Natalie Portman.

The real test of Thor will be whether or not the man with the hammer can defeat The Girl on Fire. The first Hunger Games movie opened at $152.5 million worldwide. Catching Fire will prove to be a good draw and take a large chunk of Thor’s future box office. Traditionally, a Hollywood heartthrob would have little to worry about keeping 14 year old girls and work-from-home moms in the seats, but with the over-all badassery and girl power of Katniss Everdeen on the other side of the aisle it is clear that Thor’s numbers will take a strong dip. 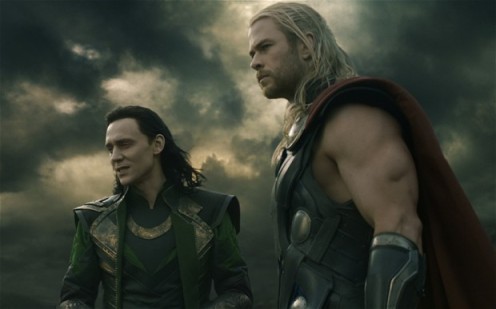 I was super excited for the release of The Dark World, mostly due to the extraordinary job done that was done with his character in The Avengers, so there was an expectation to begin with. Admittedly, I held the film to a higher standard going in. This score is almost all attributed to Hiddleston’s flawlessly deviant characterization of an inconspicuous comic villain. He needs a franchise. Hopefully he will make an appearance in Age of Ultron. I am still a little bummed that James Spader beat out Vin Diesel for the voice of Ultron, but hey, it could have been Affleck.

When people ask, "So what about you?" I reply, "Well, if Childish Gambino had a cool uncle...I would definitely hang out with that guy." Hi, I'm John. I wear many hats. I'm the artist behind the Hush Icon, touring performance writer, published author, poetry slam champion, actor, husband, community activist and amateur moonshiner. I remember buying my first comic in New York in 1984. It was Secret Wars #11. I still have it board and bagged. Over the years my love of comics has immatured. I used to be a one title guy, now I whore myself out to pretty cover art and a guest writer. I have Scott Summers tattooed on my arm, ( this may still prove to be a good decision, fingers crossed for Brian Bendis' Uncanny X-Men series) and a boyish crush on anything Natalie Portman. I love Greek yogurt and I'm seriously considering becoming a Civil War buff. I am the grandson of a Tuskegee Airman and couldn't see the point to life without YouTube. I think Yoda was the Bobby Fischer of the galaxy and fresh strawberries are priced too high per the cost of shipping and stocking. I fell in love with Spider-Man when I was nine. It made perfect sense. Nerdy kid from New York, lost his parents, lived with extended family, ( my dad left and my mom worked a demanding job) and eventually developed super-human strength and incredible abilities. Yeah, that was my dream. As far as I'm concerned, Bill Murray is a national treasure and nothing is better than cold macaroni and cheese! John Soweto. Husband, writer, lifelong nerd. View all posts by John Soweto