If you know Breaking Bad, you know that the entire series can be summed up in two words: “yo, bitch!” Aaron Paul’s portrayal of Jesse Pinkman has won the hearts of millions. With what started out as a troubled kid in need of being put back on track, his crossing paths with Walter White has destroyed any chances of his redemption. Even as Jesse plunges deeper into darkness, nothing can stop us from celebrating his boisterous attitude and affinity of the bitch word. Here are our seven favorite mentions; some carry weight and some are just hilarious, but they all have that special Jesse touch.

In the third episode of the series, “And the Bag’s in the River,” Jesse and Walt flip a coin to see who gets the duty of murdering Krazy-8, currently chained to a basement post like a dog, and dissolving his body in HF Acid. When Walt loses the toss, he avoids his responsibility and again blames Jesse because he “did not follow [Walt’s] instructions.” In a gesture that I will forever be mimicking – no seriously, I’m gonna be doin’ this shit to my grandchildren – Jesse puts on the fake finger Hitler ‘stache and calls Walt out on his bullshit, something that happens too seldom throughout the rest of the series. It’s even better because his face is still freshly swollen after having his ass beat by Krazy-8 in “The Pilot”, something that we see all too often throughout the rest of the series. The coin flip is sacred, and so is this hilarious “Bitch” moment.

Forced to get his big boy pants on after Skinny Pete gets stuck up for the blue and his cash, Jesse must pretend to play enforcer to a tweaked out couple in the sixth episode of season two entitled “Peek-A-Boo.” Jesse and the audience quickly realize that Jesse is not cut out for this line of work. He readies his gun and panting, practices his dramatic entrance into the meth house to get back the stash. In a very Jesse fashion, he is unable to really intimidate the addicts because of a young boy’s presence in the room. Meth-heads will be meth-heads, however, and one of them gets mad and topples an ATM onto the other’s head. Jesse, horrified, leaves, and rumor gets around that the mysterious Heisenberg is the one that through the ATM onto the junkie that tried to steal from him. In classic Breaking Bad fashion, Heisenberg’s notoriety comes at the cost of Jesse’s innocence.

Interesting side note: In my research, I found out that somebody has actually taken the time to register the website wheresmymoneybitch.com.

5.) “…stop whining like a little bitch and do what I say”

At the end of season four (“Salud”), Jesse is torn between two worlds. While Gus Fring has pretty much replaced Walt with Jesse as head cook, Walt has deviously convinced Jesse that Gus is the man responsible for poisoning the son of his good friend (more than friends) Andrea. To play it safe, Jesse has to cook a batch of the blue for the Mexican cartel and saves ricin to patiently wait for another chance to kills Gus. Jesse finally realizes that, although he may not be as good of a chef as Walt, he is an excellent cook. He puts one of the cartel cooks in his place, telling him basically that he sucks at his job and to shut up and pay attention. Once the batch comes back with a 96% accuracy, Jesse’s arrogance backfires on him when the cartel tells Jesse that he will be staying in Mexico as their cook, as a bargaining tool for eased relationship between Gus and the cartel. With painful irony, Gus betrays Don Eladio (who I almost just called Don Helado – get at me, Ben & Jerry’s!) and, in an odd turn of events, ends up saving Mike and Gus from the same fate he had been pressured from Walt into having. Jesse’ a genuinely nice guy and he just can’t help but save them.

Throughout the series, Walt is constantly working over Jesse, manipulating him to get the results Walt wants. Well, in season five’s “To’hajiilee,” Jesse finally works over Walt. And while it is gut-wrenching to witness the absolute downfall of Heisenberg, there is a deep satisfaction to know that it is Jesse, who has lost everything he cares about because of Walt, is the one to bring him down. After Jesse flips on Walt and, in a state of paranoia, Jesse decides that Walt is setting Jesse up to die, Jesse claims that he is going to hit Walt where “he really lives.” With Hank’s help, Jesse sets Walt up to believe that Jesse has dug up the money and is threatening to burn it all if Walt doesn’t rush to come talk to him. As Walt frantically drives to the To’hajiilee reservation, Jesse uses Heisenberg level trickery to keep Walt afraid of getting off the phone. In Walt’s panic, he admits to all the crimes that he’s committed. From poisoning Brock to killing two of Gus’ dealers, even the murders of Emilio and Krazy-8 in the first season. It’s Jesse’s cunning plan that finally does in the great Heisenberg, and ultimately leads to everything falling apart in “Ozymandias.”

After being viciously beaten by Special Agent Schrader in “One Minute,” Jesse is finally released from the hospital in the next episode. And, let me tell you, Honey Badger doesn’t give a shit. After taking a pretty hard crack in the face from Hank, Jesse was knocked unconscious and wakes up in the hospital, pretty pissed off at the whole situation. Walt’s devious act of sending Hank away ends up hurting Jesse in a bad way, and Jesse let’s Walt know that they are done (a recurring statement by both of them) and that Walt is now his “Get Out of Jail Free” card. After an orderly wheels Jesse out of the hospital to await a ride from Skinny Pete, he lights up a cigarette. The orderly then tells Jesse he must be at least fifty feet away from the entrance, to which Jesse replies…

Jesse had always been looked at as the fuck-up any of the other big players in the show, especially Walt. It’s his brilliant idea in the season five premiere, “Live Free or Die,” that everybody really starts to see that Jesse has grown the most of any character in the show. While Walt argues with Mike that the best approach is to bomb a police evidence room (real sharp there, Heisenberg!), Jesse interjects multiple times that using a magnet would be a great idea. Frying the laptop does has its drawbacks, though, as a photo, broken in the calamity, reveals the offshore accounts Gus emptied all his funds into. Try as Jesse may, he keeps screwing up at being a criminal. The idea of using the magnets, coupled with the idea in “Dead Freight” to account for the varying fluid densities, really shows that Jesse is a valuable asset. It’s with sadness that viewers wonder what could have been if Jesse had grown up a little sooner and used his powers for good instead of being used for evil. 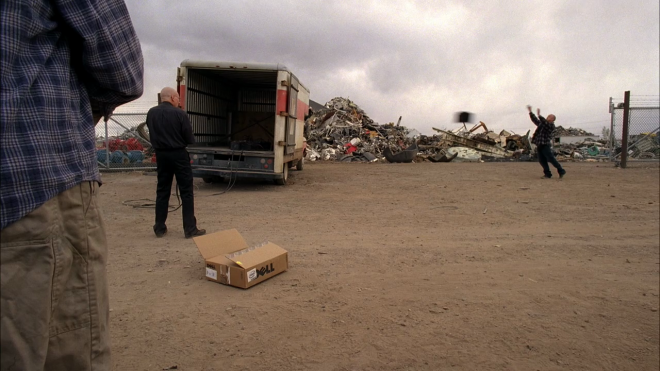 1.) “This is my own private domicile and I will not be harassed… bitch!”

Hands down, our favorite “Bitch” moment is during “One Minute.” Hank has made his way to the junkyard as Jesse and Walt are moments away from destroying the RV. Not only are Walt and Jesse hiding in the RV still, but there are remnants of their meth exploits all over the inside of the RV. With Jesse panicking and Hank out-thinking him, Walt tries to play it cool by feeding Jesse lines to tell Hank. And Jesse, following Walt’s exact instructions (that came out as very snark in my head), stops Hank in his tracks. Jesse can’t resist adding his own personal seal of approval when he figures out that they’ve stalled Hank. However, it isn’t until Walt has Saul orchestrate a phone call to Hank that convinces him Marie was in a serious car accident that  it buys them enough time to destroy the evidence in the RV. However, it makes the case personal for Hank, who beats the living shit out of Jesse soon after and begins operating outside of the law to solve the case.

I hope you like all our bitches, bitches! Vote below to tell us your favorite “Bitch” moment. There were tons of great ones that we had to leave off, so I’d love to read your opinions. Come back tomorrow where we discuss our 7 Most Shocking Moments. Keep checkin our Instagram page for more details on Breaking Bad Week and more 10 minute sketches by John Soweto to giveaway.

All photos and videos courtesy of AMC Television.