Collecting: Deadpool: Merc With A Mouth #1-13

For one second, let’s forget that X:Men Origins ever existed. Let’s pretend you have no idea who Deadpool is. He doesn’t have saber-arms like Baraka from Mortal Kombat, he doesn’t shoot frickin’ lasers out of his face. And above all, his mouth is definitely not sewn shut. Deadpool the comic book character is something very different. He’s an immature adrenaline junkie that hires out his mercenary services out to the highest bidder and talks a lot in the process. This can be an endearing quality, but it can also come off as juvenile and annoying. For better or worse, though, Merc With A Mouth is a Deadpool book the whole way through.

Merc With A Mouth starts off with Deadpool taking a mercenary job to bring back a package to A.I.M. (Advanced Idea Mechanics), which Wolverine has described as “an organized group of international science-terrorists. You know, like one of those Japanese techno-apocalypse cults? They recruit the kinda brilliant geeks and brainy outsiders who want revenge for not getting any booty (New X-Men #143).” Deadpool heads off to the prehistoric Savage Land to retrieve the package, discovering along the way that the package is (don’t laugh) his own zombified head from an alternate universe. It’s a story that makes absolutely no sense, and it doesn’t have to. Deadpool has garnered a cult following and it’s not because of his cerebral storylines. He’s a loyal and simple fellow who loves random junk food (Fresca is choice in this book), but can still kick butt when needed. Deadpool is also a big fan of the ladies and violence, stealing the hearts of the inner sixteen-year olds in men and the women that find sixteen year-olds attractive in a horny dog kind of way

Spanning thirteen issues, Merc With A Mouth is a high-octane ride full of violence and wiener jokes at the surface. But dig a little deeper, and you’ll find lots of boob jokes. Dig even deeper though, and you will find clever writing that uses pop culture references to carry the bulk of its transitions and comebacks. It’s these little nuances that really break up the story. The satirical approach to everything from The Walking Dead to Star Wars makes it seem like Deadpool has a genuinely good time throughout the story, which is refreshing after reading so many books about internal struggle and the torment of having powers. In fact, each issue’s cover in the arc is parodied from an iconic film poster and references are made throughout the book. Still today, Deadpool pokes fun at iconic ideas and pop culture references by showing up on random Marvel Comics’ variant covers. Really, Deadpool is just around to have a good time. Along those lines, one should align expectations with that concept when reading the book.

In terms of continuity, you’re kinda just gonna have to pick this stuff up as it goes. Unlike flagstaff characters in Marvel and DC, Deadpool’s continuity is all over the place. Basically, when reading Merc With A Mouth, if you feel like you missed something, it’s probably just because you did. The series that ties the closest into Merc With A Mouth is Marvel Zombies, but you don’t need it to understand the concept of this book, but rather to accept the ludicrous notion that somehow, Deadpool’s severed head is out there running amok. Notably, Merc With A Mouth also introduces some of the more memorable alternate universe Deadpools, Headpool and Lady Deadpool, as well as the Deadpool Kid (not to be confused with the kid Deadpool, Kidpool) and Major Wilson. One of my favorite things that Merc With A Mouth does with its presentation is that, on each issue, there is a one-page recap that is both informative and hilarious, helping readers kind of get an idea of what just happened in previous issues.

The main thing to take away from Merc With A Mouth is that not every comic book needs ground-breaking art or, hell, even a cohesive story. Sometimes all you need is an infallible character and a heap of charisma to make a story work. It’s a fun, thrilling ride of fourth-wall-breaking goodness. While the banter between himself (and the voices in his head) and the other characters can feel repetitive and forced, the book relies on its story’s frequent change of scenery and need to make fun of itself to really carry the story. You won’t be blown away by it’s storyline or art, but you will be thoroughly amused and entertained. 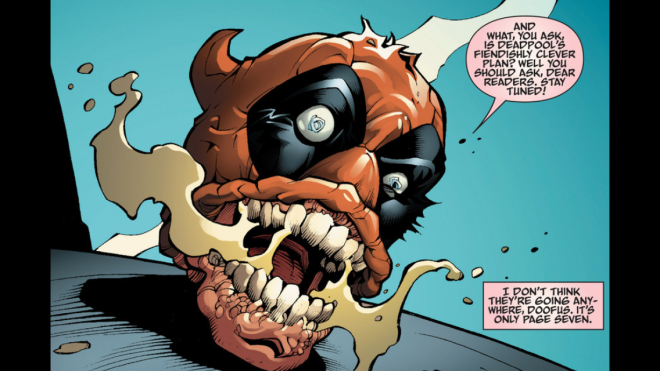 General Reception: Merc With A Mouth is generally considered a good place to start for fans who would like to get to know more about Deadpool as a comic book character. While the Marvel: NOW! reboot is kinda of floating around with no real direction, this book has a definitive storyline that at least holds up true to the Deadpool character. However, a seasoned comic book fan can still pick up on the subtle references that newbies may not understand. I would recommend this book to anybody who would like to get into Deadpool or anybody who can read a comic book casually without the expectations of our  anything too great.

Related Books: Right after Merc With A Mouth ends, the Deadpool Corps storyline begins, comprised up of multiple Deadpools to save the word from Skrulls and other ridiculous baddies.

More by the writer: Victor Gischler returns to write the first two Deadpool Corps’ collected editions. He also writes the first 26 issues of the 2010 X-Men series.

More by the artist: There’s not too much out there by Bong Dazo, but his two favorite subjects to draw are Star Wars and Deadpool,

2 thoughts on “Graphic Novel Review – Deadpool: Merc With A Mouth”