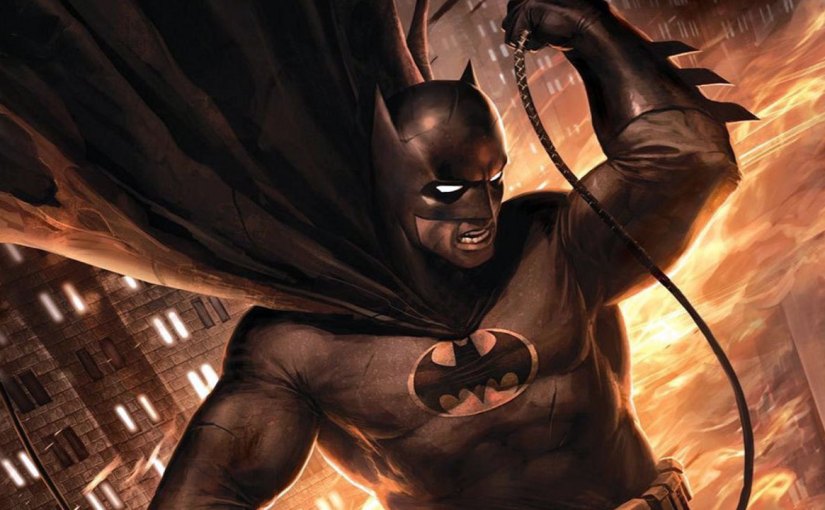 When Part 1 of DC’s animated version of The Dark Knight Returns was released in late September last year, fans were pretty upset that they would have to wait four whole months for the second half to drop. Well the wait is finally over and the entire story is now on DVD for your eager minds to digest. For those of you new to comics, the films are based off of Frank Miller’s The Dark Knight Returns, a 1986 story arc set in a futuristic 1980’s Gotham where government control is almost as bad of an issue as the youth’s grammar is. Bruce Wayne had been retired as Batman for ten years when some punk group of degenerates called the Mutants force him to pull a Michael Jordan and come out of retirement to kick some serious ass.  In short, Part 1 ends with Batman defeating the Mutants and bringing attention to himself in a major way; the media, the President, newly appointed Commissioner Ellen Yindel, and unfortunately, the Joker.

This story arc is widely considered one of the greatest of comic books ever – and it is not without reason. Considering that comics up to that point (at least mainstream comics like DC and Marvel), were for the most part very happy-go-lucky and very politically correct. They just wanted to stay in their little bubble – tell their story, catch the bad guy, get the girl. Rinse, lather, repeat. Frank Miller comes along and uses one of the most loveable characters in comic history to entertain the idea of fighting the government. It’s paramount to the Batman mythos that we follow today and asks us to question whether authority is just or not. One of my favorite quotes from this movie (and believe me, there are quite a few quotables and inspirational speeches in this one) is “You say you answer to some sort of authority. They only want me dead because I’m an embarrassment. Because I do what they can’t. What kind of authority is that?” That’s a damn good question, Batman. Part 2 is not only the more introspective of the two parts, but the most action-packed, as well. Not only does Batman battle the Joker in this movie, but he also takes on: Gotham City PD, a chaotic Gotham City, the United States government and their tool of a soldier, Superman, and untimely arthritis. The Superman part, to me, was the most intriguing. This back-story of an “agreement” for superheroes to cease being is one that I always wanted to see in full and I wish they could go into more detail (Note: For more stories exploring the government regulation of heroes, try DC’s “Kingdom Come” or Marvel’s “Civil War”). Miller also comments quite a bit on the human condition. Through a series of telecast interviews, it is pretty apparent that just about everybody in Gotham is a total asshole! Even Batman gets his Donald Trump on by repeatedly threatening to fire Robin. Half the people in the interviews make you feel like punching them in the face, and it’s a good reason the world is “going to hell in a handbasket (that quote is via Adrian).” Hopefully, both will be read and reflected upon. Frank Miller’s The Dark Knight Returns has really changed the game in comics and helped turn them from children’s books to being some of the most cerebral works of literature out there.

As far as comparing the movie to the graphic novel, director Jay Oliva and writer Bob Goodman have done a terrific job of figuring out which pieces of the book need to be cut out or elaborated on to really captivate what Frank Miller was trying to get across. You can tell that he and his team really appreciate the source matter. What seems to impress me most is how the team was able to take a four-chapter novel and turn it into a 2½ hour long film while not really adding anything unnecessary or leaving out anything vital. One of my biggest gripes about DC Universe Animated Original Movies’ last Batman adaptation (Batman: Year One) is that it too close to the source material. This is unfortunate because it keeps fans new to comics from really enjoying the comics as much as they could have. The Dark Knight Returns: Part II does not have this issue; I feel that somebody could watch both parts to TDKR and still thoroughly enjoy the novel as a new experience. One of the biggest pieces missing from the animated show is the internal thought-process that Batman has. One of the biggest recurring themes of the novel is that Batman is no longer the bulletproof God that he once was. Every panel is full of  “stupid old man” this and “senile fool” that. It really helps build the concept that Batman is a true hero, and there is no sure bet that Batman will emerge victorious.

Animation-wise, the visuals are very clean. They somehow manage to take Frank Miller’s art, which has very unique and manic style, and make it into something that translates into a strong animated movie. The fight scenes are incredible – drawn out in the interest of brutality. Both of the epic battles, one against the Joker, and one against Superman, are terrifyingly exciting and either match or exceed the impact of the ones in the original. The voice-acting is also superb, with the one exception being Michael Emerson’s Joker. As far as voice-acting goes, the bar is set at Mark Hamill every time and the performance of the actor playing Joker is based on how close to the bar he can reach. I believe that Emerson tried hard, but is cursed with sounding too much like Seth McFarlane’s Roger from American Dad. However, Peter Weller’s old man Bat’s was perfect for the image Frank Miller painted him in, and Mark Valley’s Superman was very reminiscent of the Animated Series.

Overall, my recommendation is to go out, buy both parts of the movie, and the graphic novel. It’s a special piece of history put into a format that the masses can truly appreciate it. The great thing is, you don’t need to be a comic book whiz to appreciate it. With all the small details that Miller and Oliva alike put into the final product, fans new to Batman comics will find themselves wanting to dig deeper in the catalog. Trust me, you need to give this a go!

TRIVIA:
– Dave Endorcrine, the show host that guest stars the Joker at the beginning, is a parody of Dave Letterman, and is played by Conan O’Brien.
– Corto Maltese, the island that the Russians try to invade through the movie, is actually based off a1960’s Italian comic book of the same name
SCORECARD:

IF YOU LIKED THIS, CHECK OUT THESE MOVIES:
Batman: Year One
Superman-Batman: Public Enemies
Batman: Under the Red Hood
NEXT FOR DC ANIMATED:
Superman: Unbound follows Geoff John’s Brainiac storyline. We’ve attached a trailer below.